Guest Posts
In touch with Bright Sheng at The Intimacy of Creativity
by Cathy Hung May 1st, 2012 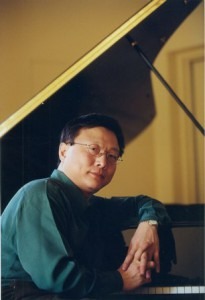 Initiated by world-renowned composer and pianist Bright Sheng, the Intimacy of Creativity is a two-week composition symposium. Selected pieces are constantly revised and refined to the best shape through rehearsal discussions and experiments between composers and performers. As a revival of the lost tradition back in the Baroque times, the Intimacy of Creativity stands as a unique music showcase of its kind that features a glamorous lineup of world class musicians. Having themed upon “music and science” during its first edition in 2011 as a celebration of Einstein’s birthday anniversary, the event is marching towards a new adventure in 2012, blending pop culture with classical music. As the second edition kicks start, artistic director Bright Sheng reveals his ambitions and discusses the IC’s future. 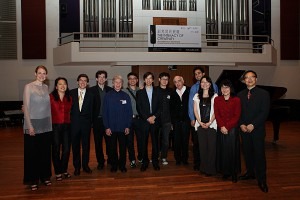 World Premiere Concert 1 - 1 May 2011
credit : The Intimacy of Creativity

Cathy: How would you comment on last year’s IC? How was the feedback from both musicians and audience?

Bright: As the first edition, I would say it went quite well. The IC is based on a centuries-old tradition somehow lost since the twentieth century. Now it becomes an entirely new concept to modern classical music scene. Moreover, the project itself does not belong to a specific genres- it does not feature purely chamber music or completely contemporary music. Because of these, we didn’t know what to expect. We were happy with the result as every participant has gained a lot.

Cathy: To what extent would you define last year’s success?

Bright: We have managed to launch this lost tradition to the world, and now everybody starts to pay attention to it- this is a huge success of last year. Although the IC is a small project, we feature a lineup of world-acclaimed musicians. We are already planning ahead for the 2013 edition; hopefully more renowned artists will be showcased on our stage.

Cathy: What is the fundamental goal you would like to accomplish this year? What would you like the emerging composers to learn from the project?

Bright: I would like the musicians to be bolder and more audacious. I would like to encourage performers to challenge composers. I even want them to challenge Beethoven’s piece, why not? As a performer, it is your job to make music sound good. When you make adjustments to the music, people will forgive you if it sounds good. But if the music sounds bad, people will always point their fingers at the performer.

This year, composers are engaged in performance at the same time. They will learn how to grasp others’ ideas quickly given a tight rehearsal and discussion schedule. To be a good composer, you don’t need to have the greatest ideas but the opportunity to work with the best performers.

Cathy: Any new updates or breakthrough you have planned at the IC 2012?

Bright: This year, the IC receives big support from the Leisure and Cultural Services Department and Hong Kong Arts Development Council on top of HKUST, RTHK as well as Dr. and Mrs. Helmut Sohmen. Apart from that, we are also trying to blend in with local music scene by featuring Austin Yip, an emerging local composer and violinist. Thanks to the Hong Kong Chinese Orchestra, we also have the opportunity to feature cellist Trey Lee, who is currently in collaboration with the orchestra on a project.

The lineup of musicians in 2012 edition is a breakthrough: we try to invite young star power of mixed background. For example, we have Mark O’Connor, a classically trained folk jazz musician; and Jonathan Wong, a local pop singer-composer who also excels on the violin. You can see we try to blend pop and classical culture through staging young music talents. In the world of pop, jazz and country music, a composition is usually written by a virtuosic performer and it evolves through rehearsals. This process happens even in ballet, theatre and opera- except in the world of classical music. In fact, it used to be a prevalent tradition in classical music history, but somehow it is lost in modern days. Music is living, so it should include both the input from composers and performers. People are used to equate composers with the Bible, the infallible authority- but they are wrong. A smart composer makes good use of performers’ talent in his music.

I hope the IC will eventually blend in with more local institutions. Since this is a small project, the size of audience base is not an issue. We work in our own style, hoping to introduce something new to local classical music scene. People will come if they like the idea.

Cathy: Showcased compositions in 2011 exhibited the relationship between music and science as a celebration of Einstein’s birthday anniversary. What were the aesthetic criteria or philosophy you’d based on for selection this year?

Bright: There is no particular stylistic requirement, but the music has to sound good. “Always write something that excites you.” This is what I tell my students. Judge with your sense of aesthetics. Everybody regards himself as having good taste, so make use of your ears and create music that sounds good.

Cathy: How do this year’s works differ from last year’s? How do these works represent this year’s IC project?

Bright: Selected works this year are more diverse in terms of style and approach to music. As this year we focus on the blending of pop and classical music, you will hear diverse musical sound of mixed presentation.

Cathy: How did you invite this year’s distinguished guest artists?

Bright: Last year, the performers were quite accommodating- they were often a bit too shy to challenge composers. So, this year we deliberately invite more outspoken performers and try to encourage them to get more involved in discussion. You see, a good composition is written to suit players- adjustments are often made according to various circumstances. Such practice is not something new, in fact we do similar things during orchestral rehearsals: if concert is held in a ‘wet’ hall, that is a venue with too much acoustic reverberation, we ask the orchestra to play slower and softer; on the contrary, if it’s in a ‘dry’ hall, a place with little reverberation, the orchestra is often asked to play faster and possibly louder.

Cathy: How do you foresee the project in near future? For example, would you like to expand the concept elsewhere?

Bright: Expansion is certainly a good idea. In future, I hope the project can feature more than just chamber music but also including other genres like choral music and chamber orchestra- but of course financial budget would be a concern. Again, it would be great if the IC can also take place in different places outside Hong Kong- again, provided that money is no subject. Ideally, I would like to organize three two-week project series in the US, Europe and Hong Kong respectively.

Cathy: For invited guest artists and emerging composers, what is the role of the IC as one point in their musical career span?

Bright: To previous participants, I hope the IC is a reassuring experience. For upcoming ones, I hope this will be an eye-opening journey. After involving in the project, I hope they would not treat Beethoven the same way they did. To be a good musician, first you will need to understand what Beethoven wants- yet you are only half way through. The remaining 50% is how you make music sound fabulous as a performer. The IC is here to assist and to shape participants to become a better musician by gathering composers and performers to work together through a face-to-face discussion; that is why the project is named “The Intimacy of Creativity”.