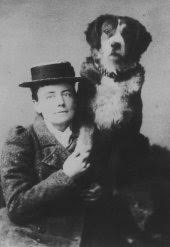 Nowadays composer Ethel Smyth is known less as a composer and more as a memoirist. Her multiple autobiographies are colorful windows into the musical life of the late nineteenth century. In 1919 she published Impressions That Remained, a book in which she shared her memories of men like Tchaikovsky and Brahms. (She famously wrote of Johannes that he stared at women like a greedy boy stares at jam tarts.) There is something about Smyth’s lightly sarcastic voice, her frankness (for the era, anyway!) about her romantic attractions to women, and, above all, her irrepressible zest for life that can’t help but draw a modern reader in.

Ethel Smyth was born in April 1858 in Kent. Her father was in the military, and absolutely opposed to his daughter making a career in music. But Ethel would not be intimidated from pursuing her dreams. She studied privately in Britain for a while, but then decided to move to Leipzig to attend the Leipzig Conservatory. Unfortunately, the Conservatory fell short of her expectations, and so after a year she quit there and began to study privately with Heinrich von Herzogenberg, a composer who was also a dear friend of Brahms.

2 Canons
During the sojourn in Leipzig, a friend of Ethel’s went on a trip to Vienna and brought back a dog named Marco. Marco was…unique. According to Ethel, he was “half St. Bernard, and the rest what you please,” and “a huge sprawling yellow-and-white puppy of the long-haired kind generally seen dragging washerwomen’s carts.” Unfortunately, her friend already had four sporting dogs, and Marco had a tough time fitting in with the pre-existing pack. Ethel fell in love and begged to take him. And so began Ethel and Marco’s happy life together!

Marco living at Ethel’s home posed its own challenges. For one thing, they lived in a small apartment, and for another, said apartment was on the third floor. So every time Ethel needed to take Marco out, they’d have to traipse down several flights of stairs. In her memoirs, Ethel remembered the torture of a cold winter when Marco had digestive problems. 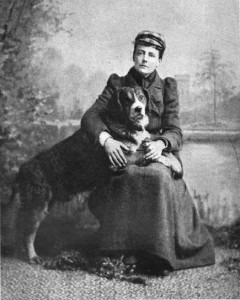 But despite the unconventional arrangement, it was a match made in heaven. Ethel even wrote, “For twelve years that dog was the joy of my life.” In her memoir she described how she spoiled Marco rotten, and how his head would rest luxuriously “on the pedals of a seldom silent piano, as if washerwomen had never been heard of.” At one point she told her young nieces and nephews how similarly large dogs were used by washerwomen to drag their carts. They tried harnessing him up, but Marco protested.

It must have been lonely at times to be Ethel Smyth. She knew that her romantic attractions to women, combined with her desire to pursue music professionally, meant she would never have a traditional family. So she and Marco became each other’s family. And happily, unlike her father or a husband or children, Marco the dog never complained about her work. “A greater philosopher, a more perfect comrade for a busy woman, can never have existed; if, in the stress of work, I put off his dinner too long, all he did was to shut his eyes and moan very, very softly, like a baby.”

“I never knew a more hilarious temperament than Marco’s – so much so that, invited to attend a rehearsal Brahms was holding of his piano quintett at the flat of Brodsky the violinist, it seemed advisable for once to leave him in the street. I was seated at the piano turning over [pages], when suddenly the door burst open and with a bound Marco was beside me, while the cellist’s desk, taken in his stride, went crash. Having spoken disparagingly of the great man’s sense of humour, it is only fair to say he rose to this occasion and declared the whole thing took him back to the Harlequinades of his youth… During the two bereft winters I spent in Leipzig, anything more markedly kind, fatherly, and delicate than Brahms’s manner to me cannot be imagined, but I had always known that with all his faults he had a heart of gold.”

Even Tchaikovsky was smitten by the girl and her dog: one of his affectionate letters to Ethel ended:

“Goodbye, dear Mademoiselle; I hope that you have composed many fine things, and I wish you every possible happiness. P. Tchaikovsky. P.S. – I hope that your dear dog is faring well!!”