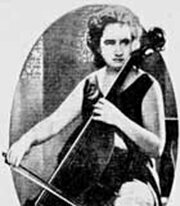 Hilger was born in 1904 in the small town of Trauenau, Austro-Hungarian Empire, the youngest of eighteen children (only four survived.) Elsa and her two sisters, Maria and Greta, were prodigiously gifted young musicians. After the family heard the news that Elsa’s father had died during World War I, their mother, seeking the best music education Europe had to offer, moved to Vienna with her brilliant daughters. All three won scholarships. Elsa became the youngest member of the Conservatory Orchestra, and her talent was such that a rare Guarnerius cello was bestowed upon her. She made her debut at age twelve as soloist in Tchaikovsky’s Rococo Variations. Later, she recalled, “I was hungry; it was the war years. They put wood blocks beneath my feet because I was so short my feet would not reach the floor.” 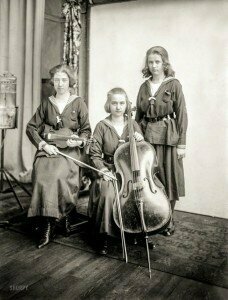 The family emigrated to America in 1920. The sisters formed the Hilger Trio and they toured all over North and South America, their mother managing the bookings and logistics. Traveling across the country by train and by car, Elsa at the wheel of their Buick, often encountering pockmarked, secondary roads, they performed in both prestigious halls and high-school auditoriums. But these arduous trips presented important opportunities. Hilger auditioned for the master cellist Pablo Casals who thought she was “a genius on the cello”, and the sisters often enjoyed playing chamber music with Albert Einstein, an avid amateur violinist.

In 1921, the trio played an extraordinary program in New York, which included Saint-Saëns Cello Concerto, Brahms Double Concerto, Moses Fantasy, the Handel-Halvorsen Violin and Cello duo, and Tchaikovsky Piano Trio. In a review by Herbermann for Violin World, he stated,

“Rarely do we find parents blessed with three children possessed of such artistic gifts as Elsa, Maria and Greta Hilger. These three young artists appeared at their first subscription concert at the Town Hall… Youthful as they may appear to be, their rendition proved to the large and appreciative audience a quality of matureness equal to that of artists of long experience. 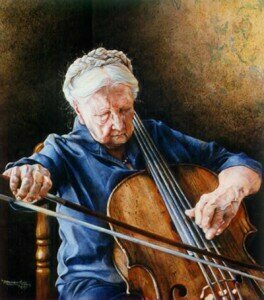 In the early 1930’s tragedy struck. The trio left their instruments in a locked car while they had a brief business meeting in New York. The car door was wrenched open and both Maria’s violin and Elsa’s irreplaceable 1730 Guarnerius cello were stolen.

Hilger was invited to play privately for the legendary conductor Leopold Stokowski, the music director of the Philadelphia Orchestra in 1934. At the time, professional orchestras had very few female members, most often the harpists—considered a more acceptable instrument for a woman to play. The maestro wanted to hire Elsa but there was a stringent requirement. Hilger would have to audition for a committee from the musician’s union. For two grueling hours, they put her through her paces. Not finding anything to complain about they seemed satisfied that she could do the job. When Stokowski hired Elsa, she became one of the first women offered a permanent position in a major orchestra. Then, as now, the Philadelphia Orchestra did a lot of touring, and each time they arrived in a new town the newspaper featured Hilger as the solitary female member. She performed with the orchestra for 35 years, until 1969, missing only one day for the birth of her son.

She was promoted to associate principal cello in 1944 and appeared as soloist with the orchestra numerous times. Her chocolaty, rich sound and scintillating vibrato can be heard on the recording of the Brahms Piano Concerto No. 2 in B-flat with piano soloist Rudolf Serkin, Eugene Ormandy conducting. This famous cello solo in the andante movement has rarely been played so beautifully!

Hilger taught at the Philadelphia Conservatory of Music and students would say she was very demanding as a teacher and despite her tiny hands, fearless as a performer.

During a 1994 interview on NPR with host Liane Hansen, Hilger, who was by then 90 years old, told an amazing story. Oddly enough, during a performance in Carnegie Hall with Stokowski, Hilger heard mellifluous tones of the instrument used by her stand-partner, cellist Victor Gottlieb. It sounded familiar, and looked just like her Guarnerius, which had been stolen two years before. Elsa, astonished, begged to try the instrument. After playing a number of virtuosic excerpts on the instrument, she was certain. It was her beloved cello. Many years later she bequeathed the instrument to her grandson, Alexander Ezerman, who today is on the cello faculty at the University of North Carolina in Greensboro, carrying on the tradition of four generations of cellists.

Elsa Hilger continued to teach and perform well into her ninth decade of life, giving her last recital in 1999. She died in 2005 at the age of 101.

Brahms Piano Concerto No. 2 in B- flat major, Philadelphia Orchestra with Rudolf Serkin, piano, and Elsa Hilger plays the cello solo at 26’08 minutes in.