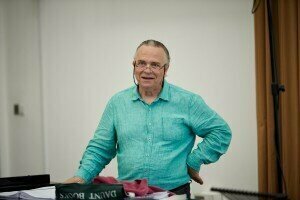 On 18 and 21 July, Sir Mark Elder conducts concert performances of the world premiere of an opera that was previously thought to have been consigned to oblivion: Donizetti’s L’Ange de Nisida.

Italian musicologist Candida Mantica has spent the last ten years painstakingly reconstructing the score, from nothing more than loose sheets of music found in dusty old boxes, only some of which made it onto a (similarly illegible) microfilm.

The results will be shown in two concert performances of the opera, in a joint production between the Royal Opera House and Opera Rara, with Joyce El-Khoury in the starring role of Sylvia, the King’s mistress who falls in love with a lowly soldier. Sir Mark Elder – the artistic director of Opera Rara – will be at the helm of the orchestra of the Royal Opera House.

Rehearsals have been slightly different than usual; instead of turning up with a critical edition of the work that is widely accepted to be ‘correct’, the reconstructed score offers its own set of challenges.

‘As we rehearse the piece, I query things and challenge things,’ says Sir Mark. ‘Anything that seems to be questionable we check against the manuscript, and often it’s a mistake.’

Manuscripts are often untidy and illegible, only being made readable when parts are required for rehearsals; for L’Ange de Nisida this point never arrived, as the theatre that was pegged for its premiere went bust in 1839. Determined not to have a good piece go to waste, Donizetti salvaged excerpts of the opera, refashioning them in the form of La Favorite, which was then performed in 1840. In Sir Mark’s words, ‘If you’ve got a good tune, don’t throw it away.’

‘He altered the scale of [La Favorite] and changed the dramaturgy of it to suit a bigger theatre in Paris,’ Sir Mark explains. 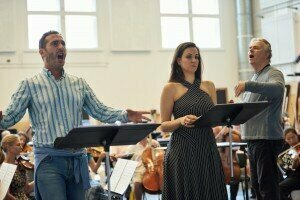 ‘For example, one duet was transposed down a tone for La Favorite to suit a contralto rather than a soprano. The upshot of this is a sort of complex mixture of bits from L’Ange de Nisida hoiked out of their original place to suit a new libretto.’

The rehearsal process has been different for the orchestra of the Royal Opera House as well. Over time, mistakes in orchestral parts are corrected over the years, and eventually new editions are published with fewer and fewer errors each time; but with L’Ange, everybody is at square one.

‘The orchestra are marvellous. They’re used to the idiom of [Donizetti’s] music, but now that they realise what this process is, they’re concentrating on helping me get the best textural result. As a result of that, we’re making changes all the time, they’re finding things to question and we’re putting things right. We’re confident that by the time of the performances we’ll have a really good score.’

Donizetti had written more than 60 operas by the time he came to write L’Ange, which he wrote after he’d moved to Paris, having had enough of his native Italy’s strict censorship laws. ‘These operas that he wrote in Paris show how forward-looking he was still becoming,’ says Sir Mark. ‘We’re all convinced that we would have had even greater pieces had he lived into the 1850s. 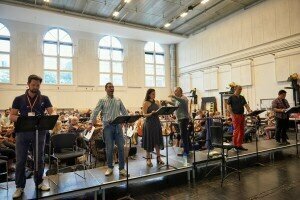 ‘This opera is the last piece in the jigsaw for presenting to the public all the music Donizetti wrote for the Parisian public. Nobody ever thought that this would be possible. We hope people enjoy it – we’re all enjoying and admiring it enormously.

‘It is a work of great maturity. It has humour and pathos and tragedy, and it’s a very difficult mixture. This semi seria – rather than opera seria or opera buffa – is not wholly tragic. It has very lively human interaction, some of which is funny, some of which is full of distaste and discomfort.

‘I hope that the result will be very enjoyable and entertaining.’