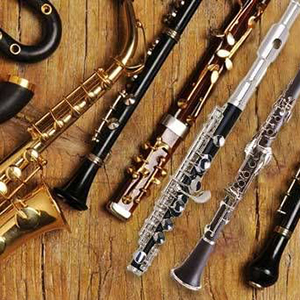 A large aspect of an orchestral wind player’s life can involve playing auxiliary instruments – instruments that you learn alongside your main instrument, for example the bass clarinet, cor anglais, piccolo or contrabassoon.

The word ‘auxiliary’ can be misleading, implying these instruments are secondary or always in the background; however, there are pieces throughout the orchestral repertoire that make big use of these lesser-played cousins of the usual wind section. While sometimes players double (for example playing both second flute and piccolo in a piece, switching between them where necessary), certain pieces of the orchestral repertoire have standalone parts written for a specialist player of that instrument.

Think of the cor anglais singing its heart out in Dvořák’s New World Symphony, or the bass clarinet gurgling away in Tchaikovsky’s Dance of the Sugarplum Fairy. Auxiliary instruments bring their unique sounds to the orchestra in memorable and novel ways – and not every solo has to be lengthy, either. The contrabassoon solo in Stravinsky’s Petrushka consists of just one note – yet it is crucial to the drama of the piece. Plus, it’s funny. Sorry, contrabassoon.

The world of ‘doubling’ only starts there; requests for doubling, especially for projects outside the symphony orchestra, can quickly extend beyond the normal expectations of a piccolo or bass clarinet and into the world of tin whistles, ocarinas, melodicas, pan pipes…the list is endless. If the instrument is suitably obscure, the composer or ensemble you work with will normally source it for you, but it will still be up to you to put the time in and practise it up to a suitable standard. I had to double on melodica for a contemporary opera project earlier this year, and practising fast-ish runs on a cross between a keyboard and a recorder alternated between being frustrating and comical. Rest assured, by the time the gig rolled around, all was well.

Clarinet players also often play the saxophone, especially in theatre bands or anywhere outside the orchestral context. As most of my work comes from orchestral engagements, I haven’t gone down that road: there are so many people who sound so much better than me on the saxophone that I figured it’s best to leave them to it. Trust me: if you heard me trying to get a sound out of a saxophone you would agree. 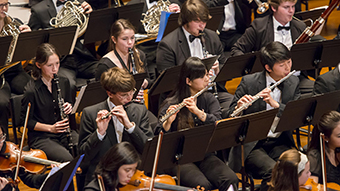 Generally, as a wind player, you just go with the flow and eventually you get a feel for which instruments you’re happy to double on. I had a narrow escape from a strange doubling situation a few months ago, when I was an extra on a TV show where several musicians had been booked to mime various wind instruments. I turned up expecting to mime on a replica of an 19th-century basset horn (half way between a clarinet and bass clarinet), but a miscommunication between the music and props department led to me being handed a French horn – pretty much as far away from the basset horn as you could imagine. And no, I have no clue how to play one. Luckily we were just miming…


Francaix Divertissement, for clarinet, clarinet, and…clarinet. Auxiliary instruments can be useful in lockdown!