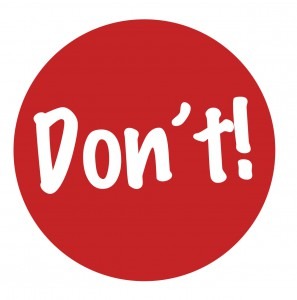 Songs tell us about all sorts of things: love, the beauty of spring, and all about happiness. But there are lots of songs that just go to the negative. When we look at songs that say don’t, won’t or can’t, we may find that out of the negative notion comes a positive. Because these are all contractions, we’ll explore musicals and jazz with this theme.

There’s a wonderful story about this song from Andrew Lloyd-Webber’s Evita and, once you know the story, the song makes a bit more sense. The chorus for the song “Don’t Cry for Me Argentina” originally began with the line “It’s Only Your Lover Returning” and that much more personal statement makes more sense than the line that became the most recognizable from the musical. The negative statement had more of an impact than the more standard positive statement!

Lloyd Webber: Evita: Don’t Cry For Me Argentina (Charlotte Perrelli)
Peter Pan rallies his Lost Boys with a wonderful list of all the things they won’t do, starting with his own declaration of “I Won’t Grow Up.”

Styne: Peter Pan: I Won’t Grow Up (Peter Pan, Slightly, Curly, Twins, Lost Boys)
In a short 30-second piece, composer Christopher Fox gives us the ideal solution for our too-noisy world. The inspiration for this work was the idea of a modern “Cries of London,” but this time using the small ads in free newspapers, spam e-mails and billboard slogans. 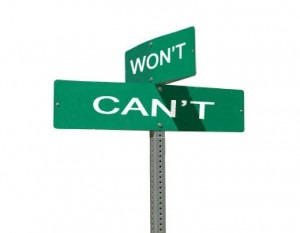 As the ideal summery of all that he hates in the modern world. Professor Higgins enumerates all the errors of the English language on the tongue of its people in the opening song from My Fair Lady – and no one can scorn the world better than Rex Harrison.

Loewe: My Fair Lady: Act I: Why Can’t the English
In a surprising jazz joke, Jessye Norman takes on a bit of Ellington and a lovely double negative – listen to the wonderfully flat-sounding non-swinging chorus at 00:49.

Ellington: It Don’t Mean a Thing (If It Ain’t Got That Swing)
So though the don’ts and won’ts and can’ts may seem negative, we know that they’re actually showing us the other side. And in all these examples, using the contraction works much better – can you imagine how truly terrible it would be to hear “It Doesn’t Mean a Thing if It Doesn’t Have That Swing”?!