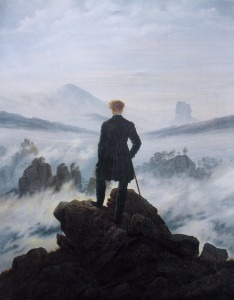 Caspar David Friedrich – Wanderer Above the Sea of Fog

Sometimes we don’t want the brightly lilting tunes of a flute or the ecstatic runs of a violin or piano – our mood wants something slower, something sadder, something for the dark hours. Music not for melancholy but for introspection.

The instrumentation can be for solo voice or for orchestra – it’s the feeling that results that’s the important part.

We can start with a very familiar piece to set the tone: Beethoven’s Moonlight Sonata. The tempo (adagio sostenuto), the key (minor) and the arpeggiations in the bass free us to imagine a scene – dark, a bit of moonlight, but not too much – and this frees our imagination for thinking about why we’re out in the dark, with such a scrap of moonlight. There’s nothing frightening there, but still we are driven inside ourselves, accompanied only by our thoughts.

Beethoven: Piano Sonata No. 14 in C-Sharp Minor, Op. 27, No. 2, “Moonlight”: I. Adagio sostenuto (Glenn Gould, piano)
The next piece with a hint of the dark comes from Berlioz’ La damnation de Faust. The muted strings, the sharp timbre, take the dance of these sprites into the shadowy corners.

Berlioz: La damnation de Faust, Op. 24, Part III: Scene 12: Ballet des syphes (Dance of the Spirits) (Hallé Orchestra; John Barbirolli, conductor)
We rarely associate Vivaldi with introspection, and revel in his works that celebrate the seasons. But in his Sinfonia in B minor, at the holy sepulcher, Vivaldi takes us into a great religious mystery, and again the slow tempo and the minor key are important in setting the scene.

Vivaldi: Sinfonia in B Minor, RV 169, “Al Santo Sepolcro”: I. Adagio molto (Combattimento Consort Amsterdam; Jan Willem de Vriend, Conductor)
Although Shostakovich has a reputation for brash and sometimes vulgar writing, his slow movements can carry the fabled Slavic dark mood to us.

Shostakovich: Piano Concerto No. 1 in C Minor, Op. 35: II. Lento (Martha Argerich, piano; Orchestra della Svizzera Italiana; Alexander Vedernikov, Conductor)
Rachmaninov’s Fantasy Tableaux take our search for introspection into a contemplation of the night and of love. This set of musical pictures for 2 pianos do not have a programmatic content but we can feel in them the frustrated desire of the lover, alone, at night. 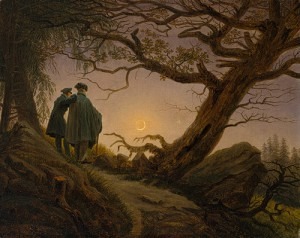 Couperin: Les gouts-reunis: Concerto No. 13 in G Major: II. Air (Jerome Hantai, viola da gamba; Kaori Uemura, viola da gamba)
Arnold Schoenberg’s 5 Orchestral Pieces was given its debut by Sir Henry Wood and the Queen’s Hall Orchestra, 3 September 1912, in the Royal Albert Hall, London. Schoenberg didn’t provide names for the movements but his publisher asked him to provide them, knowing that it helped the audience. Schoenberg wasn’t initially against the idea saying ‘… whatever has to be said has been said by the music. Why, then, words as well? If words were necessary, they would be there in the first place. But music says more than words.’ In the end he agreed and so we have The Past.

Schoenberg: 5 Orchestral Pieces, Op. 16: No. 2. The Past (London Symphony Orchestra, Robert Craft, cond.)
Each piece in this listing has its own idea of darkness and each can help us get in the mood for introspective thought. We need the contrast with all the bright and quick pieces to appreciate those times when a slow tempo, a minor key, and a mysterious timbre can carry us away.