Composers Inspiration
Where is the Common Man?
by Maureen Buja June 18th, 2016 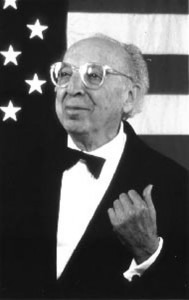 Beginning with a crash and a boom, Aaron Copland (1900-1990) beings his Fanfare for the Common Man. The work was inspired by a number of sources, both political and musical.

On the political side, reference is made to a 1942 speech by Vice President Henry A. Wallace on the goals of WWII for the Allies.

On the musical side, Copland wrote in his autobiography that the conductor of the Cincinnati Symphony Orchestra, Eugene Goosens, had requested a fanfare from him. During WWI, as a conductor in London, Goosens had requested fanfares from British composers to begin each concert. As conductor in Cincinnati, he was commissioning American composers for similar fanfares during WWII. Of the 18 fanfares he commissioned, only Copland’s has remained in the repertoire.

As a start to a concert, the work is perfect. The combination of brass and drums is stirring, and in Copland’s American style, has become symbolic of the positivism and optimism of the US in the 20th century.

Copland: Fanfare for the Common Man (Slovak Radio Symphony Orchestra; Stephen Gunzenhauser (cond.)
As a fanfare it has had a life far longer than its 1943 appearance. It has been used as the wakeup music for the astronauts on the Space Shuttle, for presidential inaugurations, for the opening ceremony of the Scottish Parliament building for the entry of Queen Elizabeth II and retinue, and it was the theme for Expo 67 in Montreal and lives on in the sound of the Montreal Metro. It’s become an international fanfare – the Common Man, as mentioned in Wallace’s speech, is now everywhere, even in space.

Copland used the fanfare again in his own music and took the opportunity to explore the work in a new way. The theme was used in his own Symphony No. 3 as the core of the final movement. This work, Copland’s last symphony, was written in celebration of the ending of WWII. If we think of the Fanfare as heralding America’s entry into the war, the Third Symphony signals its successful ending.

As you listen to the symphonic movement, you can see how Copland took his brass and percussion work and softened it. The movement doesn’t begin with a crash, but with a woodwind duet. As the movement continues, you’ll hear, time and again, the contrast between the bold brass and the mitigating woodwinds, signalling the new post-war world.