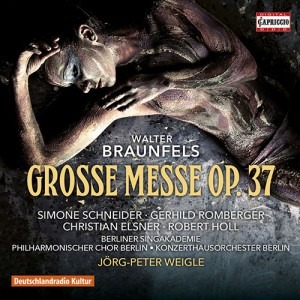 Braunfels’ hand at drama and his careful consideration of the text betrays the opera composer, not only in the Te Deum, but also in the Great Mass which he finished in 1926. Braunfels was at the height of his (from thereon never waning) musical powers and fame. The Great Mass isn’t a liturgical work; the Mass speaks directly and very audibly from a sincere spiritual urge. “He is a high-romantic, solidly anchored in the German composition- culture, and yet he has a very unique language – sensationally well-orchestrated, as it happens – about him, which makes it so fascinating” (Weigle).