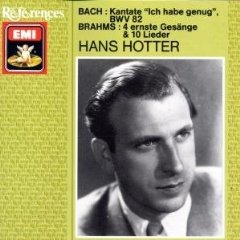 
Ich habe genug (I have enough)

This is one of my favourite Bach Cantatas, and I own several versions of this recording, sung by various tenors, sopranos, mezzos and altos, but it is definitely Hans Hotter’s performance that I listen to most often. His deep voice furnishes the Cantata with the magnitude and seriousness that it deserves, but most importantly, it is his phrasing and breathing that make the whole piece so dramatic, intense and heartwrenching.