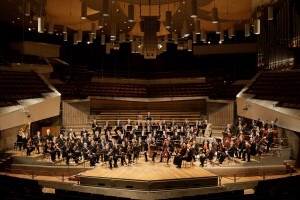 The advent of storing music digitally allowed consumers to carry a significant library of music on a player little larger than a CD. For the classical listener, with an ear to fidelity and musical quality rather than portability, new developments in delivering high-quality content are going to be of more interested. Two subscription access developments are the Naxos Music Library (recently updated with the EMI catalogue) and the Berlin Philharmonic’s Digital Concert Hall. The NML is a great resource for discovering music with over 57,000 CDs available. However, it really only provides another means of accessing material already available. The Digital Concert differs from this in that it takes advantage of the latest technological developments to bring a new experience to listeners. The Berlin Philharmonic’s Digital Concert is an excellent example of how classical music production has seized upon ways to use digital media to enhance and expand listener’s experience of the orchestra.


The Digital Concert Hall (DCH) is the Phil’s virtual concert venue on the internet, where, with a paid pass, you can hear and see the orchestra perform live in around 30 broadcasts each eason. There is also an extensive archive facility which, to date, has 119 concerts stored since the 2008/2009 season– which you can listen to in their entirety, or work-by-work. Both the live concerts, and the archived material, take advantage of the six remote-controlled High Definition cameras, giving crystal clear views of the Philharmonie; this, combined with sensitively balanced and mixed audio are a great way to experience live music without having to travel anywhere at all. The broadcasts are available at three speeds – with the best being a 1280×720 pixel video stream and audio at 320kbits/s – which is achievable for most users, and is a reasonable balance between quality and bandwidth. The technology is impressive, and a short ‘behind-the-scenes’ video gives an insight into the workings of the concept.


While the audio quality may not be the highest quality available (320kbits falls way behind downloadable resolutions), what does not fall below stellar standards are the Berlin Phil’s performances. As you’d expect, almost half of the concerts available are conducted by the Berlin Philharmonics chief conductors Sir Simon Rattle (37) and Claudio Abbado (20), but there is also an host of guest conductors, who along with some of the finest soloists performing today provide an incredible auditory experience for any one interested in orchestra music. The programming is wide ranging, I recently enjoyed Emmaual Ax’s performance of Mozart’s Piano Concerto No. 22 in E flat major K. 482, the virtuosic vibrancy of Ax’s playing not lost despite being over 500 miles away from the action. Similarly, the sensitive interpretation of Berg’s Seven Early Songs by Christianne Stotijn (mezzo-soprano) in the same concert translated beautifully onto the DCH medium, with the camera allowing us to see all of the dramatic performance. Brahms’ Piano Concerto No. 2 in B flat major, performed by Leif Ove Andsnes, bristles with fantastic clarity and is also enhanced by the visual interest. Indeed aesthetically, the views of the performers in the broadcasts could not be better, and offer a range of viewpoints that those attending the concert in Berlin could notexperience.


Aside from the concert material, there is a wealth of other information available. For each live concert there is an informative interval discussion with one or two of the performers; there is a section of historical performances; and a selection of material from Abbado’s ten years as chief conductor, including the performance of Mozart’s Requiem from the Karajan memorial concert, as well as all nine Beethoven symphonies. The hour-long programme entitled The Silence that Follows Music is also currently available; it is an interesting look into the working life of Abbado, one of the most loved conductors, both in his own words and those who worked with him.


With the Berlin DCH project in it’s fourth year, and having done the groundwork to see if it’s a sustainable project, it’s surprising that more orchestras or venues have not followed suit. For the wealth of material available, the €140 yearly subscription (~£120) seems to be reasonable, and having seen how difficult it was to get a ticket for the Berlin Phil’s four concerts in London this year, and considering that tickets ranged from £15-75, the DCH starts to look good value for money. Anyone seriously interested in taking advantage of the new opportunities afforded by the so-called digital revolution should investigate a pass. Why not try the 48 hour pass to make up your mind?