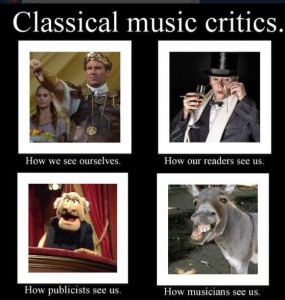 There was a time, not so long ago and at least within my living memory, when critics were regarded as significant arbiters of taste and culture who could, seemingly, make or break a career with one well-aimed stroke of their incisive pen. But critics are not gods (and never have been), and these days, with the rise of online review sites and blogs, music criticism has become far more democratic. Many bloggers are not professional journalists, but many are musicians or teachers, who are competent and intelligent writers with a depth and range of knowledge sometimes superior to that of broadsheet music writers. Many of us (myself included) write about classical music simply because we love it. Bloggers and online critics tend to publish their reviews well in advance of broadsheet providers, sometimes the same night as the concert or at least the next morning, and offer a more personal but no less objective view of the concert. I also love the concept of tweeting during* and immediately after the concert, thus bringing an immediacy to the review, and an off the cuff, instant reaction comment can sometimes express far more than a considered paragraph written the next morning (*during the interval – naturally, my phone is turned off during the performance!).

Audiences do not wish to be, nor should be, patronised, and while many audience members may not share the reviewer’s depth of knowledge or musical vocabulary, we should never talk down to our readers. Good reviews should not seek to tell the public how to listen – nor instruct the musician in his art. A good review offers an objective overview of the concert. In my own concert reviews, I try to offer an intelligent and readable account of the concert, in effect what it was like to be there.

“Classical music reviews are important because, if well written, they can serve as a guide for non-specialists or people new to the music, as well as providing a point of reference for those who attended the event reviewed. We believe that the best reviewers are very knowledgeable about music, and have the additional gift of being able to explain musical details in clear, accessible language. Because at Bachtrack we ask reviewers to write not only about performance but also about the works played, they can also be of interest to people wishing to learn more about pieces or performers when considering whether or not to attend events”
(Alison Karlin, founder & director of Bachtrack.com)

Rhapsodic, poetic and overblown writing at the expense of clear-sightedness can be irritating to read and may be used to mask a lack of knowledge. Conversely, a review which is confined only to technical analysis is dull to read, and may come across as overly didactic or high-falutin. Such writing is really only accessible to other trained musicians or musicologists and academic, and does not necessarily get to the “soul” of the music. After all, it is the emotional engagement which most people seek when going to hear classical music (or indeed any music). Schumann said that the best music criticism is that which leaves after it an impression on the reader such as that which the music made on the hearer.

“Where sympathy is lacking, correct judgement is also lacking”
Mendelssohn

An objective reviewer should not be blind or deaf to faults or inconsistencies in a performance, but we should never glory in them. In fact, I have a few phrases which enable me to be “kind” in instances of sloppy playing or a memory lapse (“some uneven passages”, “an anxious moment” for example). And as an occasional performer myself, I understand the amount of time and effort that goes into preparing for a concert. Performers are human, just like the rest of us, and sometimes it is not always possible to arrive at the venue in a calm state of preparedness: maybe the traffic was bad, or one is ill. These factors can affect the quality of a performance by even the most poised musicians.

For the performer, a review is an endorsement, a testimonial and a confirmation of their craft and art. Performers do not perform to please critics, but a good review or reviews can make a difference to a performer’s commercial success leading to increased concert attendances and CD sales, and for a young performer, greater confidence and credibility. But I am always a little suspicious of performers who claim they “never read” reviews. This apparent disregard suggests either an over-arching ego (“I’m far too important/talented to bother with reviews”), in which case the performer in question should perhaps exercise a degree of humility, or a lack of self-confidence (“I won’t read reviews in case the reviewer says something nasty/negative about me”). As British pianist Peter Donohoe says, performers should “take it as a compliment that the critic writes about you at all“.

Writing about music is hard to do, because the activity of listening to music is highly subjective. I have received comments on my reviews suggesting that I have not heard a concert “properly” or disagreeing with my judgement of a particular performance. The answer to this is, of course, that we all hear differently and our enjoyment of music can be very personal.

Peter Donohoe also believes reviewers and performer should be “on the same side – that of the music”. And that, for me, sums up very neatly the reason why I write about music: I love music and care very passionately about classical music. It has been a significant part of my life since birth (there was music, live and on LP and the radio, in my parents’ and grandparents’ homes, I was taken to concerts from a young age, and encouraged to study music), and I’m not really sure what I’d do without it. And if one of my reviews encourages someone to buy a ticket for a classical music concert, then I reckon I am doing my job properly!

“How blessed are they who are born deaf, and are spared the agony of listening to the hideous sounds of Symphony No. 3 by Roy Harris, just performed by the BBC Symphony Orchestra. Roy Harris should have stuck to truck driving instead of insulting music-lovers with his senseless noise.”
(Letter to the Editor of Radio Times, 1942, p. 107, from ‘The Lexicon of Musical Invective’)

‘The Critics’ with Peter Sellers and Irene Handl