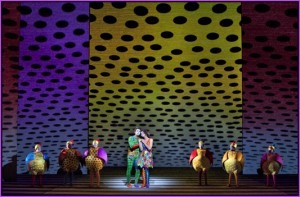 If you are into opera, Mozart, and Masonic lore, then Magic Flute is the right fit. What you encounter in San Francisco Opera’s new production of this masterpiece is a tremendous artistic and visual landscape. These ingredients combine to form an inspiring, fresh, and subtle reinterpretation of the famous opera.

The design of any new opera isn’t always the primary focus. However, Jun Kaneko’s strong artistic vision comes through and is involved in every detail of the production. Mr. Kaneko is a Nebraska-based Japanese-American visual artist. He has lived in the US for almost 50 years and is lauded and exhibited throughout the world. This Magic Flute is his third foray into opera. When speaking with Kaneko, the artist quickly dispels any notion of having an encyclopedic knowledge of opera. In fact, as he puts it, “I just listened to the music endlessly”. He goes on to say that this incessant process led him to come up with artistic concepts and visual reference points. One strong attribute of his vision is the use of projection rather than large set pieces. This in itself is a departure from traditional set work that many opera theatres are now undertaking. Why, one might ask? A large portion of the audience enjoys the movie-like quality of sets that transform into different landscapes and transport us to imaginary worlds. Perhaps one answer is that it is cheaper to construct and operate panels that serve as backdrop for the light projections. But herein lies a significant problem that must be overcome. The artistic quality and vision have to be strong and persuasive for the average opera audience to suspend the visual need for a set and still be effective in setting the background for the story. Jun Kaneko solutions are imaginative and very energetic. There are constant lines that run from one point to the next that would please a string theorist in all of us. They slow or speed up according to the speed and mood of the music. When the music is static or calm they transform into dots. 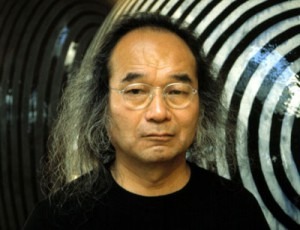 Another aspect of the production is the costume design. This is always a strong addition or a powerful deterrent in operas. Kaneko’s vision here could be described as a combination of Japanese stylisation with colourful, almost child-inspired palette. Supernumeraries are Kurokus, which are a direct link to the kabuki theatre tradition and serve as the “help” on stage in the court of the powerful Sarastro (basso cantante), a character no doubt influenced by the Masonic emphasis on Egyptology and Persian mythology. Other tributes to the Masonic traditions are a projection of an obelisk, reminiscent of the Washington Monument, which in itself is a stark reminder of the founding fathers’ Masonic roots, as well as lion statues that look like the sphinx. The costumes are wide at the shoulders, in a triangular slant that can be easily associated with pyramids. There are also elaborate garments and headpieces, especially for the Queen of the Night (coloratura soprano), an operatic character steeped in legend and tradition.

The Magic Flute is really a play with musical numbers. The original German dialogue in between the musical pieces is immense. I would think operas in Mozart’s time were really an all-evening social affairs; “Bring your kids and a picnic”-type gatherings. This production uses an English translation by the general director of San Francisco Opera David Gockley. Aside from translating the libretto, he also added the dialogues in English, which are witty and use many references to today’s culture. The San Francisco audience certainly had a laugh at Tamino’s (tenor lead) description of the Queen of the Night: “Star-flaming queen, sounds like something out of a drag show” as well as Papageno’s (baritone lead) line regarding his occupation: “These my boys are eggs. Eggs grow into birds. I practice sustainable bird-catching”. Often times in the States, opera heads are business managers intent on keeping their companies solvent. However in this case Mr. Gockley, a one-time baritone, proved that he also needs an artistic outlet in his current position.