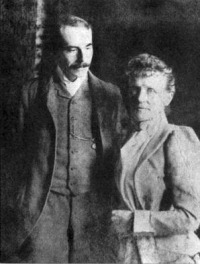 English composer Edward Elgar used to create musical puzzles and then challenge his wife to solve them. He would create little piano pieces depicting various friends and Alice Elgar had to figure out who he was depicting.

These little works were the springboard from which Elgar’s 1899 work Variations on an Original Theme, or as it’s more commonly known The Enigma Variations, was created.

For Elgar, this work was the key to his future. Elgar was a largely self-taught composer and came from humble origins. He thought of himself as an outsider and it was only with the success of this work, the Enigma Variations, at age 42, that his career as a composer really started. He had some success as a writer of choral music and as a conductor for local ensembles, but when the Enigma Variations received its premiere in London under Hans Richter, Elgar became the modern “overnight” success. The work’s originality, charm, and craftsmanship took the audience and made Elgar the leading composer of his generation. It also made Elgar the leading English composer on an international scale that hadn’t been seen since Henry Purcell was the leading composer in the late 17th century. Elgar put English music back on the international stage. 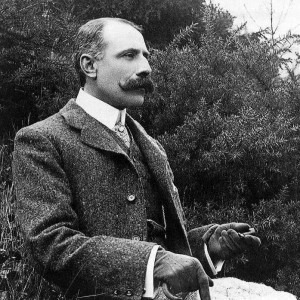 The Enigma title comes from the word ‘Enigma’ written at the top of the score over the first theme and is the name of the melody used as the theme. However, at the same time it is part of a larger puzzle: Elgar said that it was also the counterpoint to a” well-known melody” that is never heard. Despite many guesses, Elgar did not accept any of the solutions that were proposed while he was alive (including Auld Lang Syne; Home Sweet Home; and God Save the Queen) and he took the secret with him to the grave.

The work is dedicated ‘to my friends pictured within’ and the theme that the variations are based on isn’t something that’s initially heard as happy or light. Elgar himself told a critic that for him, the theme carried with it all his loneliness as a failed artist.

Elgar: Variations on an Original Theme, Op. 36, “Enigma”: Theme
The theme is followed by fourteen variations with titles that, at first, hid the subjects from the audience:

After some time and with some help from Elgar and his friends, the titles were revealed as:

Elgar said that ‘The sketches are not ‘portraits’ but each variation contains a distinct idea founded on some particular personality or perhaps on some incident known only to two people’ and as we go through his friends, we find these personality quirks and incidents are what make this work unique.

The first variation is dedicated to his wife, Caroline Alice Elgar, which repeats a 4-note fragment that Elgar would whistle when he came home.

Elgar: Variations on an Original Theme, Op. 36, “Enigma”: Variation I: CAE
Another variation takes up not the subject, but his dog, Dan, and how he fell into a river.

Other variations take up personalities, such as Variation 4, WMB, depicting a friend who was well-known for expressing himself quite energetically.

Elgar: Variations on an Original Theme, Op. 36, “Enigma”: Variation X: Dorabella
The most famous of the variations is No. 9, Nimrod. Nimrod was a Biblical hunter and is a play on words on the last name of the subject, Augustus J. Jaeger, which also means hunter.

Elgar: Variations on an Original Theme, Op. 36, “Enigma”: Variation IX: Nimrod
There is something so noble, and so sad, and, at the time, so quintessentially English about this variation that it has become a standard work for funerals; for memorial ceremonies, such as in London at the Cenotaph on Remembrance Sunday; and other solemn occasions. It was played, for example, in Hong Kong during the 1997 Handover Ceremony. It is the only movement of the work that has taken on a separate life.

The final variation is for Elgar himself. EDU refers to the nickname Elgar was given by his wife. The final variation on Elgar also has glimpses of the two great influences on his life: it also contains the music used in variation 1, CAE, and variation 9, Nimrod, referring to his wife and his best friend. It’s somehow eloquent that he uses their music in the music he uses to define himself.

Elgar: Variations on an Original Theme, Op. 36, “Enigma”: Variation XIV: EDU
We can also hear how the Enigma theme has changed from its first lonely and melancholic iteration. By the end, through these little pieces about his friends, all stemming from an original theme that he devised, we find the Enigma theme has transformed into something that signals success; we are certain by the end that we are in the presence of an artist in triumph.