I love the violin for its incredible emotive range. With a violin in hand, a master can paint so many pictures: a romp through a field, a sun-dappled parlour, a stately march, a manic pandemonium. Or nature in full bloom, as was captured in this year’s theme for the Hong Kong International Chamber Music Festival 2010 – ‘music in nature’.

I attended the Gala Opening and Closing Concerts, both of which took place in early July at City Hall. Taking my seat in the Concert Hall, I observed a varied audience, ranging from grandpas to children and from business casual to leopard print. The musicians gathered were equally varied, with some from Europe joining others from Hong Kong and China. 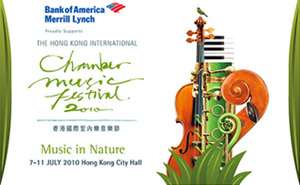 Together, they delivered programmes that featured mostly string ensembles, although several other instruments were included as well. The pieces fit well with this year’s theme, perhaps with the exception of Shostakovich’s Piano Trio No. 2 in E minor, Op. 67, which appeared in the Closing Concert. But I am getting ahead of myself.


The Gala Opening Concert began appropriately with Haydn’s String Quartet No. 5 in D major, Op. 64 – a much loved piece evocative of powdered wigs and sun-drenched picnics. It was played by the New Helsinki Quartet, whose seamless performance set a coaxing and tranquil tone for the pieces that followed.

In spite of the obligatory disturbances from several cell phones, the musicians all played beautifully. Among them, I observed two that I feel particularly obliged to point out. The first was cellist Trey Lee, a true artist whose movements were infused with controlled grace. Echoing the beauty of the music in every line of his body, he played his instrument like an extension of his voice, his expressive flourishes producing a truly unique interpretation of Schumann. He was simply captivating to watch.

The second was pianist Colleen Lee, who immediately drew the eye in a beautiful rose-hued chiffon dress. Once her fingers alighted on the keys however, all else disappeared behind the jubilant music she created. Her high notes fluttered like the wings of a hummingbird, as delicate as the pianist herself, yet each note was solid and controlled. One cannot help but feel her delight in every bar of the Glinka she played.

The same performers returned for the Closing Concert several evenings later, where I heard the Shostakovich I mentioned. I confess I have never been a fan of his work, but Trey Lee, along with Grzegorz Kotow on the violin and Peter Jablonski on the piano, delivered an unforgettable performance that gave me a new appreciation for the piece. I always believed contemporary work to rely more on interpretation than melody, and this trio delivered. They fleshed out each note with a manic energy that lent the music an undeniable charm, reminiscent of a child’s gothic play box – mischievous, fevered and irresistible. It was such a brilliant performance that the audience could not keep from applauding partway through the piece.

Perhaps the remnants of this energy bled over into the Schubert that followed, because it was played with more frenzy than I generally prefer in my Schubert. Nevertheless, it was a triumphant performance that ended the festival on an appropriately festive note, which was, perhaps, the whole point. The applause was uproarious, and performers from the preceding concerts came onstage to take a bow alongside that evening’s performers. It was an experience obviously delightful not only to the audience, but the musicians as well.