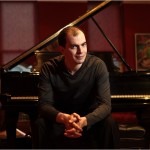 Odd, the pianist Kirill Gerstein thought. A music critic from Houston was coming to interview him in Jacksonville, Fla. Mr. Gerstein’s manager had arranged the meeting, at the Omni Hotel’s J bar, to coincide with a run of concerts last November. Might as well meet the writer, the pianist thought.


But instead of a critic waiting at the bar, it was the man from the Gilmore festival. And in his hand was an envelope proclaiming Mr. Gerstein the latest winner of one of the arts world’s great windfalls: the $300,000 Gilmore Artist Award, given every four years to an unsuspecting pianist.

“I swallowed it,” Mr. Gerstein said of the mischievous ruse in an interview in New York on Tuesday. “I was so amazed. I went kind of blank for a minute.”

Mr. Gerstein, 30, is the sixth member of an elite and eclectic group of pianists that includes Ingrid Fliter, Piotr Anderszewski and Leif Ove Andsnes. He will receive $50,000 outright to spend as he wishes and can apply the rest to anything that furthers his career or artistry, subject to the Gilmore festival’s approval. He will give a recital at the festival in Kalamazoo, Mich., on May 3.

The award, which will officially be announced on Thursday morning, is music’s answer to the MacArthur Foundation“genius” grants. And it is something of an anti-Van CliburnCompetition, a tacit rejection of the hoopla, bloodlust and horse-race quality of the international competition circuit.

It is administered by the Irving S. Gilmore International Keyboard Festival in Kalamazoo. Nominations are solicited; an anonymous committee sifts through commercial and noncommercial recordings, some of them surreptitiously obtained; committee members secretly slip into dozens of concerts — sometimes keeping to the balcony or hiding their faces with programs — to assess the performers, who are not supposed to know they are under consideration.

Mr. Gerstein, a naturalized American citizen of Russian origin, said he had no immediate plans to spend the money. “I’m looking forward to fantasizing with Dan the things that can be done,” he said, referring to Daniel R. Gustin, the festival’s director and the supposed music critic from Houston.

Mr. Gerstein ran through a few ideas: commissioning a work; carrying out a project that marries piano playing to a visual display or dance element; or combining his roots in jazz with his classical career. Mr. Gerstein also has long-term ambitions to record the music of Busoni, whom he calls the James Joyce of composition for his modernist, magpie tendencies.

Previous winners have used the money to take a sabbatical for practicing, to hire a publicist or commission works and, in almost all cases, to buy a piano. Mr. Gerstein ruled out the last option. He owns five pianos. They are lodged at his family home in Newton, Mass., and his residence in Stuttgart, Germany, where he teaches at the conservatory. “I think I should not be buying one for a while,” he said dryly.

His instruments include a Bechstein with two keyboards, one of 16 made by the company; a Steinway B grand; an 1899 Blüthner; and an 1848 Pleyel, its original parts intact, that is identical to Chopin’s favorite piano. Of the piano in general, he said: “At times it’s your friend. At times it’s an all-consuming monster that’s about to devour you.”

Mr. Gerstein has thinning hair and an overbite that gives him a boyish air. He ponders the effect of recordings on listeners’ ears and finds freshness in sticking to the score and stripping away performing tradition (a word he does not like). “It can sound shockingly original if you just follow what’s written there,” he said. He also does not like the word career. “I prefer life in music,” he said.

Mr. Gerstein was born in Voronezh, in southern Russia, to a mathematician father and music-teaching mother. His parents, unusually for the time and place, had a large jazz collection that absorbed Mr. Gerstein. From the time of his earliest memory he studied musicianship and piano fitfully, until he became serious about the instrument at 10, at a specialized music school. At 11 he won a piano competition in Poland, where he encountered live jazz musicians for the first time. He later spent two summers there at a jazz seminar. “This was like a revolution,” he said.

At a jazz festival in St. Petersburg, Russia, Mr. Gerstein encountered Gary Burton, a vibraphonist and teacher at the Berklee College of Music in Boston, who eventually arranged for him to attend. At only 14, and without a high school diploma, Mr. Gerstein moved to Boston with his mother to study jazz at Berklee.

Soon, he said, he began to feel a little “overfed” with jazz and turned to classical music, partly influenced by an acquaintanceship with Ralph Gomberg, the former principal oboist of the Boston Symphony Orchestra. Looking back, Mr. Gerstein explained his conversion as the “radical position of a 16-year-old.” He said it seemed more interesting “to be busy with the great creations of the great minds” rather than with whatever he could produce as an improviser.

He dropped out of Berklee just shy of a degree and attended theManhattan School of Music. His teacher there was Solomon Mikowsky. He also took lessons with the prominent pedagogues Dmitri Bashkirov (in Madrid) and Ferenc Rados (in Budapest), both of whom excoriated his playing at first hearing but eventually took him on.

Mr. Gerstein came to public attention in 2001 with a first prize at the Arthur Rubinstein Piano Competition in Tel Aviv. The next year he received a Gilmore Young Artist Award worth $25,000, becoming the first Gilmore Artist Award winner to have done so.

Mr. Gerstein has a busy concert schedule and plays with major European orchestras. He also collaborates in chamber groups with highly respected players like the cellists Steven Isserlis and Clemens Hagen, the violinistJoshua Bell, the flutist Emmanuel Pahud and the clarinetist Martin Frost. Reviews have generally glowed.

He has been teaching at the conservatory in Stuttgart since 2006, an unusual pursuit for a young pianist with a blossoming international career. But teaching, studying and performing are all part of the same endeavor, he said. “When I have to explain a piece to another person, I have a greater clarity of vision,” he said.

The official profile of a Gilmore Award winner is “a superb pianist and a profound musician” with charisma and broad musicianship who wants, and can keep up, a major international career. Candidates can be of any age or nationality; recent winners have been around 30. Countries of origin include Argentina, Poland, Norway, Finland and Britain.

The award was created in 1989 by the foundation established from the wealth of Irving S. Gilmore, whose family owned a department store in Kalamazoo and who was an heir to the Upjohn fortune. A modest and shy man who lived in a small apartment later in life, he was a serious amateur pianist and wanted to dedicate some of his money to helping musicians. The Gilmore Foundation, which has an endowment of $188 million, is the major provider of funds for the festival and the award.

The festival’s director chooses the evaluation committee, which this year consisted of Mr. Gustin himself; Matías Tarnopolsky, at the time the artistic administrator of the New York Philharmonic; Sherman Van Solkema, a music professor at Grand Valley State University in Grand Rapids, Mich.; Ann Schein, a concert pianist and teacher; Don Michael Randel, president of the Andrew W. Mellon Foundation; and Curtis Price, then the president of the Royal Academy of Music in London.

“They saw me in Toledo and Wichita and Birmingham, England,” Mr. Gerstein said. “You never know who is watching you where.”