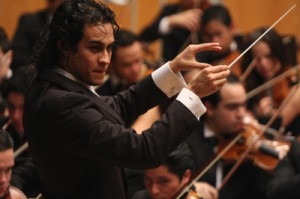 Another success story for El Sistema has emerged, with the announcement that 27-year-old conductor and violinist Diego Matheuz is to be the new resident principal conductor of La Fenice, starting next year. He succeeds Eliahu Inbal and has signed a four-year contract.

Matheuz is principal guest conductor of Claudio Abbado’s Orchestra Mozart in Bologna. Two years ago, he replaced Antonio Pappano for a tour of Italy and Switzerland with the Orchestra dell’Accademia Nazionale Santa Cecilia. He’s also conducted the La Scala Philharmonic, at Maggio Musicale Fiorentino and at the Spoleto (Italy) Festival.

His made his debut at La Fenice just last October, leading a production of “Rigoletto.”

A concertmaster of the Simón Bolívar Youth Orchestra of Venezuela, where he is based, Matheuz this season made debuts with the Royal Philharmonic, Stockholm Philharmonic, Israel Philharmonic and the Mahler Chamber Orchestra, among others. This summer he leads Ozawa’s Saito Kinen Orchestra in Japan and on tour in China. Major debuts throughout Europe and South America are planned for the 2011-12 season.