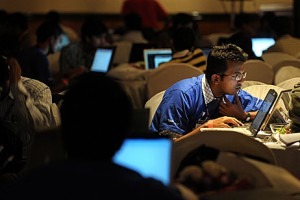 Earlier this week, I took part in a lively discussion that’s now available as a podcast in WQXR’s series Conducting Business, in which the violinst Lara St. John, the blogger-critic Pete Matthews (of Feast of Music), and I have our say on the question of whether the Web is making criticism meaner. (The title of the podcast is Music Criticism as Contact Sport.)

This morning, I Tweeted the link to the podcast and the question, Does the Web make criticism meaner? and a couple of artists promptly responded, unequivocally, Yes.

As someone who’s written my share of tough reviews, I thought a lot about this response. My basic stance on what the Web has done to music criticism is very positive: it’s allowed a lot more discussion and a lot more response. I am opposed to the idea of the critic holding forth unchallenged from the ivory tower, and am encouraged by a model that allows other viewpoints to come into play: if I write a review people don’t agree with, I hear a lot about it from readers, colleagues, sometimes the artists themselves. To me, this is really the point of the exercise: the more people are talking about the art form, the better it is for everybody; and my mission statement for this blog is that it’s all about everyone’s opinion rather than just my own.

I think that the reason the Web is perceived as meaner is partly that it puts these debates in writing, for all to see, and partly because when there are a plethora of opinions there are more likely to be a few that really sting. Virtually everyone has the tendency, when reading ten opinions on him- or herself, to give far more weight to the one really nasty one (I still trot out a couple of choice epithets about myself that are years old, especially “a mean-spirited, deeply biased menace,” which I believe came from a leading opera manager, and which I have considered having made into a T-shirt). If you’re an artist perusing a site that encourages no-holds-barred opinionating, like Parterre Box, chances are that you may read something about yourself that stings. (Wherefore the advice I always give artists: Don’t read the reviews. Don’t let those voices get in your head.) And comments sections seem to be fertile ground for really nasty invective — less in the music world, in fact, than in many other areas, like politics. A number of large organizations, including the Washington Post and YouTube, are currently putting considerable energy into cleaning up the filth out of their comments sections.

But this is not a reason to condemn the Web wholesale. For one thing, there have always been print critics who have specialized in stinging barbs as well, and those came without the benefit of the accompanying discussion that makes it palpably evident that people care, passionately, about the art form. For another, it affords a glimpse of a vox populi that traditional media outlets never used to give us. I’d rather base my opinion on 50 responses than the voice of a single critic, and surveys show that a lot of other people feel the same way. For my money, I’d rather see the energy and passion, even if it’s accompanied by some unfortunate asides, then be restricted to an obedient world in which all opinions are disseminated politely and considerately, and colorlessly, and without response.

As for the claim that blogger-critics are less informed than newspaper critics, and less edited, I’ve said time and again that I don’t buy it. There are great bloggers and not-so-great bloggers, and there are lousy newspaper critics, and critics who put things into print that desperately seem to need more editing than they got. I present to you a review that ran on a blog, and a review that ran in a print newspaper, with all the benefits of paid editors. Now can we please stop making sweeping judgments about print vs. web, and return the focus to where it belongs: good music writing vs. bad?