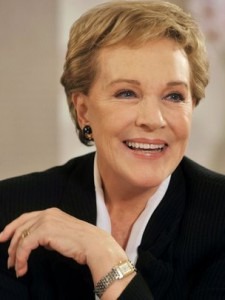 Julie Andrews lost her singing voice after an operation

When vocal cords are damaged the impact can last a lifetime. It is not like a replacing a violin or restringing a guitar.

It is why researchers are getting excited by the prospect of “artificial vocal cords”.

A team of US scientists believe they will be able to test the synthetic tissue, which would be injected into damaged vocal cords, next year.

They said animal tests had shown it was safe.

When the lungs force air our through the vocal cords, the two folds of tissue vibrate to produce noise. If they are damaged, by straining them too hard or through surgery, the body’s natural response is to create scar tissue.

This is not as flexible as natural vocal cord tissue, leaving a person sounding hoarse.

Scientists at the Massachusetts Institute of Technology have been trying to develop an artificial material which mimics vocal cords as closely as possible.

They have tested a gel, called polyethylene glycol 30, which can flutter around 200 times per second – about the same speed as a woman during a conversation.

Prof Robert Langer said: “The synthetic vocal cord gel has similar properties as the material found in human vocal cords and flutters in response to air pressure changes, just like the real thing.”

The star of Mary Poppins and The Sound of Music, Dame Julie Andrews, had her vocal cords ruined by a throat operation in 1997.

She has backed the research. She became involved after being treated by Prof Steven Zeitels, from the Massachusetts General Hospital Voice Centre.

He said: “About 90% of human voice loss is because of lost pliability.

“I went to Bob Langer because I knew he could help design a material that would ultimately help patients speak and sing again.”

The gel has been tested in animals, and the researchers said it appeared safe. However, the gel is still a long way from being used to restore the singing talents of the likes of Julie Andrews.

Prof Anthony Hollander, the head of the school of cellular and molecular medicine at Bristol University, said: “This is exciting work from a world class team, but it is far too early to know if this interesting idea can be made to work.”

He said one of the challenges will be to get the artificial tissue to “integrate properly” with the natural vocal cords and work as a single unit.

The gel would last only for a relatively short time, so regular injections – possibly up to five a year – are thought to be needed.

The prospect of artificial vocal cords was discussed at the American Chemical Society’s meeting in Philadelphia.