Media
Why there’s nothing wrong with being bored by opera
August 29th, 2014
Tags: opera 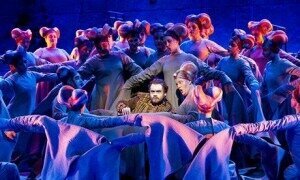 Not another Flower Maiden! … Parsifal. Photograph: Tristram Kenton for the Guardian

Do you find opera tedious? Do bits of Shakespeare send you to sleep? Well, you’re not alone. David Hare, Julian Barnes and John Eliot Gardiner talk to John Crace about the importance of being bored

There’s no hiding it. I find some passages of Wagner insufferably tedious. Take Parsifal, just opened at the Royal Opera House. Some of the music is sublime, but other bits invariably have me nodding off. I really wouldn’t mind if I never saw another Flower Maiden again. Same with Tristan and Isolde. The Liebestod, the final aria, would be one of my Desert Island Discs, but there are long stretches of act two I’d happily cut. Nor is it just Wagner. I’ve struggled through Mozart’s La Clemenza di Tito several times, but its longueurs remain. Likewise Shakespeare. Never again will I put myself through an uncut five hours of Hamlet – and I find many scenes from The Tempest all too resistible.

These works rank among the finest operas and plays ever written. They have stood the test of time. So how come large chunks of them leave me cold? Is it possible that moments of boredom are one of the components that makes these works great? Or is it a failure of my own critical faculties as an audience member, a failure by the singers and actors, or a failure on the part of the composer or playwright?

The conductor John Eliot Gardiner suggests it could be any one of the three, but the audience should not be too quick to blame themselves. “It is the job of the composer and the musicians to carry the audience with them,” he says. “The greatest musical dramatists – Monteverdi, Purcell, Rameau, Mozart post-Idomeneo, Berlioz, Verdi post-Don Carlo and Janácˇek – are the ones whose compositions sag least. And even then, you may have to make judicious cuts, unless you have the singer power.

“With Wagner, audiences tend to fall into two camps. Those who bow and scrape with reverence, and the sceptics who feel there’s a great deal of flatulence. I’m a sceptic. Friends have told me Parsifal is one of the greatest operas, but every time I’ve tried to listen to it, I’ve fallen asleep. I feel the same way about Tristan, too.”

This doesn’t mean that the music shouldn’t make demands on you, he adds. It’s just that every bar should count. “No one should feel obliged to defer to a musician’s reputation. Opera doesn’t need to be indulged. There are many works I struggle with: Der Rosenkavalier being one. It just feels too long, and I find myself wondering why all this inventive music is going on. It’s like being fed too much cream and dessert. It rapidly becomes indigestible.”

Canadian soprano Barbara Hannigan, who recently got rave reviews for her interpretation of Agnes in George Benjamin’s Written on Skin at the Royal Opera House, reckons Wagner makes different demands on his audience. “With many composers, you have to meet the music halfway,” she says. “For Wagner, I’ve learned to be more passive. To let the music wash over me. Wagner is something that is done to you. Sometimes my mind does wander, but that’s part of the creative process. I’m listening, but I’m thinking about other stuff.”

Hmm. That sounds suspiciously close to nodding off. Or at least making allowances. “I’m a very forgiving person,” she laughs. “Wagner did get carried away with his own self-importance. He needed a better editor, but he just couldn’t kill his darlings. So I forgive him for his extra 20 minutes. I like the fact it’s not perfect.’

There are also some practicalities with Wagner. Flying Dutchman and Das Rheingold aside, you’re not going to get out of the opera house in much under five hours. Getting to Parsifal in time for a 5pm start after a full day’s work, is putting even the most committed Wagnerphile’s concentration to the test. Wagner himself would probably be horrified by the idea. He saw Parsifal as a sacred work and expected audiences to prepare accordingly. Modern opera houses have to be commercially pragmatic: they can’t afford to only put Wagner on at the weekend, so compromises have to be made.

Seldom with the music, though. Directors of plays make free and easy with the scalpel. Whether it’s because they feel even a little of Fortinbras is too much of a good thing, or they just think three hours is about all an audience can manage, Hamlet is almost always heavily cut. Opera directors tend to be much more sparing, omitting the odd aria here and there, but performers and audiences generally expect a work in full. The conductor Robin Ticciati walked out of a series of performances at the Zurich Opera after the dramaturg insisted on cutting all the Mozart recitative. Even the boring (or, to be kinder, treacherous) passages tend to stay, with Wagner generally being the least cut of all. Partly because it’s extremely hard to cut an opera that has been composed through – and partly, one suspects, out of reverence.

“An audience must have the confidence to admit that there are structural inadequacies in the great works,” says Jude Kelly, artistic director of London’s Southbank Centre. “We’ve all had moments when we’ve dozed off. But there is also a sense that the best art is like life. Some of it is a bit dull, but you need the boring parts to appreciate the climaxes. Reaching the end of a Wagner opera is like climbing a mountain: part of the achievement is in the struggle to get there.”

Boredom in the arts can also be something of a moving target. “What bores us changes with age,” says novelist Julian Barnes. “When I started listening to classical music, I found slow movements boring. Now they’re the movements I most look forward to, while I can doze off during a jaunty presto. Like many others, I think one of the most boring passages of opera is enclosed within the sublimest of contexts: the mocking of Baron Ochs in Rosenkavalier. If only they could cut the scene down to, say, 90 seconds.

“I don’t find any of Wagner boring, but Meistersinger could lose an hour without much loss. In literature, Don Quixote is a great novel, and a great, great novel if you skip some of the repetition. Jocosity dates, and quickly becomes boring: chunks of the middle of Ulysses could go.”

Is boredom, then, one of the risks associated with great art? Perhaps even integral to it? Playwright David Hare thinks there may be some truth in the notion: “Someone, and it’s too long since I studied literature to remember who, argued that it is a mark of the greatest – ie Shakespeare, Dostoevsky and Dante – that they have long unreadable passages. Because they achieve greatly, they also fail greatly. Their achievements are beyond the rest of us, but so are their misfires.”

Hare believes art works by contrast. “A film producer will often say to me, ‘Why can’t we have another fabulous scene like the one in the cafe?” The answer is, ‘The scene in the cafe is great only because of the way we arrive at it. If we had a second scene in the cafe, it would be less great.

“Take the two best films I have seen this year. It does take 20 minutes to adjust yourself to Clio Bernard’s The Sleeping Giant. It has a deliberately roundabout strategy that draws you in slowly – and then rewards you so thrillingly that you forget it took a little time. On the other hand, Paul Greengrass’s Captain Phillips goes about things slap-bang entertaining from the off and is slap-bang involving to the end, without let-up. Who’s to say one is better than the other?”

It is almost inconceivable that Wagner would have entertained the possibility that his work could be boring. Mozart certainly would have had the humility to do so. He wanted to entertain: he cut huge slices of Idomeneo on the eve of its premiere in Munich because he realised it wasn’t working. Wagner, one suspects, would have been more likely to blame an audience for failing to share his vision.

Or maybe they do share his vision. The novelist and Wagnerphile Philip Hensher believes boredom is part of the vision. “Boredom is a sincere emotion in Wagner,” he says. “The last act of Tristan is fantastically boring, a boredom only relieved by the wonder of the ending. I am a great fan of boredom. When you get used to the path of the boring bits, you start to miss them if they aren’t included. Parts of Parsifal are meant to be purgative.

“We do need to be careful how we judge boredom, though. At the time Parsifal was composed, 1882, few people would have expected to have heard a Wagner opera in its entirety more than a couple of times in their life. There were no recordings, and performances were infrequent. So audiences didn’t have the same opportunity to become familiar with the boring bits as we do now. Having said that, there are some people nowadays who leave the theatre after the third act of Götterdämmerung saying it seemed far too short.”

Not me. Nor John Eliot Gardiner. “A musician should never undertake to perform a work he or she doesn’t believe in completely,” he says. “Which is why I’ve never conducted Wagner.” But could he be tempted? “I never say never,” he laughs. “But it would require a lot of self-questioning and study.” Opera houses take note: this could be a Parsifal sceptics would pay good money to see.