Media
Why the community that sings together stays together
February 12th, 2020
Tags: society 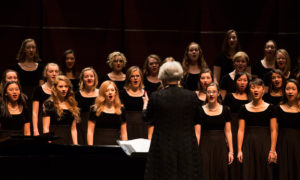 In Bohemian Rhapsody (2018), the movie about the British band Queen, the scene that sticks in my mind depicts the Live Aid concert in London in 1985. Queen belt out their best-loved songs and the crowd is singing along, swaying, clapping and stamping its feet. I could empathise a potent sense of togetherness in the audience, a feeling of cohesion between thousands of fans, coming not only from a shared enjoyment of watching the band but, more importantly, from being part of the music-making. It’s no wonder that the film shows the Live Aid donations start to climb during this set: we know that social bonding is associated with more prosocial behaviour. As a researcher, I am interested in how and why this sense of solidity from singing comes about.

Singing is universal. It is found in all cultures and, despite protestations of tone deafness, the vast majority of people can sing. Singing also often occurs in collective contexts: think about sports stadiums, religious services and birthday celebrations. Given these two characteristics, my colleagues and I wondered whether singing is a behaviour that evolved to bond groups together. Full story.