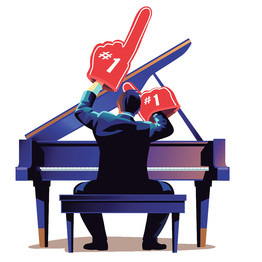 Boris Giltburg, an Israeli pianist who won Belgium’s Queen Elisabeth Music Competition last month, has mixed feelings about his victory. “I’m a bit angry at the world for not having come up with another way of discovering talent other than competitions,” he recently told a Reuters reporter, going on to say that he would never serve on a jury for a classical-music competition.

Mr. Giltburg’s comment attracted widespread attention—but it shouldn’t have. The only thing surprising was that the person who said it had just snagged first-place honors in one of the world’s most prestigious musical competitions. Such high-pressure events have long been regarded with suspicion by serious artists. Glenn Gould went so far as to claim that they leave their “eager, ill-advised supplicants forever stunted, victims of a spiritual lobotomy.”

Maybe. But one thing is for sure: They don’t work.

What would it mean for an artistic competition to “work”? Van Cliburn was catapulted to world-wide celebrity when he won Russia’s International Tchaikovsky Competition in 1958, and since then his victory has been cited as the quintessential example of how such events can make a crucial difference in the lives of gifted artists. But Mr. Cliburn retired from the concert stage two decades later, burned out at the unripe age of 43, and most observers put much of the blame for his disintegration on the unnatural effects of his having become an overnight superstar.

Even more to the point, Mr. Cliburn is the only classical musician to whom such a thing has happened. It’s been a half-century since any of the first-prize winners of the Queen Elisabeth Competition went on to have indisputably major solo careers. And Van Cliburn International Piano Competition in Fort Worth, Texas, launched in 1962 in honor of the Texas-born pianist, is notorious for picking gold medalists who fail to make it into the top tier of renown.

Why are music competitions so bad at singling out potentially major artists? Because the winners are chosen by juries. A jury is at bottom a committee—and a committee, as John le Carré famously said in “Tinker, Tailor, Soldier, Spy,” is “an animal with four back legs.” They exist to generate and perpetuate consensus views. They can’t make great art, and it’s all but impossible for them to agree on great artists. Such disagreement inevitably leads to compromise, which more often than not produces B-plus winners who please all of the jurors but thrill none of them.

Mr. Giltburg’s complaint set me to thinking: Given their record of near-total failure to identify artists of promise, why does anyone still bother to hold music competitions at all? It seems clear that they’ve become irrelevant—especially now that the road to success for classical musicians is no longer as well defined as it was in 1958.

Back then, winning a competition was a fairly reliable way for an artist to make his presence known throughout the music world. Top-tier prize winners were promptly signed to exclusive recording contracts and booked by symphony orchestras for concerto dates. Sometimes they even made it onto television. (Mr. Cliburn, for instance, appeared on “The Ed Sullivan Show” and “The Tonight Show.”) None of that is true now. The major classical labels are all teetering on the edge of extinction, and the only way for a pianist to get big-media exposure in 2013 would be by murdering his manager. Sure, it’s possible for young musicians to find an audience through new media—but not in the old-fashioned all-at-once way exemplified by Mr. Cliburn’s dizzying rise to the top of the heap. Increasingly, savvy artists of all kinds are self-marketing themselves to micro-audiences by way of such Web-based technologies as iTunes, YouTube and podcasting.

So is there still a place for big-money competitions? Possibly—but only if their underlying basis is rethought. Imagine, for instance, a foundation that decided to start an “anticompetition” that turned the traditional rules of the game on their head. Here’s how it might work:

Needless to say, this anticompetition is a thought experiment, a deliberately unrealistic attempt to cast new light on an old problem by changing the terms of the discussion. It probably wouldn’t work, at least not in the sense of consistently producing winners who go on to world-class careers. But at least the results would be different—and when it comes to music competitions, different can hardly help but be better.