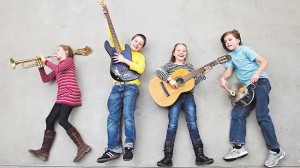 – The ancient Greek philosopher Plato said: “Music is a moral law. It gives soul to the universe, wings to the mind, flight to the imagination, and charm and gaiety to life and to everything.”
This is one of Don Spencer’s favourite quotes. For the former Play School presenter and founder of the Australian Children’s Music Foundation, this quote forms the basis of the message he is trying to put across – that music should be an essential part of a child’s education.
“We know that music brings joy and solace, and makes us feel happy,” Spencer says. “But research has also discovered music plays a powerful role in the cognitive development of children. Music inspires creativity, imagination and self-expression. It also builds self-esteem and is good for memory skills.”

– The power of music
Much research supports both Spencer and Plato. A Stanford University study found that musical training improves the way the brain processes the spoken word. It showed that musical experience can help the brain improve its ability to distinguish between rapidly changing sounds, a key skill in understanding and using language.
Research from Canada found that children aged four to six years old who had music lessons had better memories, as well as higher literacy and maths levels.
Another study, from the US, showed that children aged five to seven years who had been lagging behind in their school performance caught up with their peers in reading, and were ahead of them in maths, after just seven months of music lessons.

– Not in the curriculum
Research shows it’s not that smart kids play music, it’s that music makes kids smarter. It supports Spencer’s call for music to be a standard part of the school curriculum, like English and maths.
“Music is everywhere, but not at 75 per cent of public schools around Australia who don’t have a dedicated music teacher,” Spencer says. “It’s sad that many children don’t have access to formal musical education, particularly when it [has] such an impact on a child’s development.”

– It’s up to parents
Involving our children in music doesn’t have to be expensive. And many parents give their kids musical exposure subliminally, be it through singing, the radio or stereo.
But parents can take it to the next level by talking about music and exposing kids to different styles.
For many older children, music is part of their culture and while parents don’t have to like it, they can still engage their kids in conversation about it.
Ideally, Spencer would like every child to learn an instrument. “[Kids can access] cheap instruments like a ukulele, recorder or harmonica,” Spencer says. He says the internet has a lot of free videos which teach you how to play instruments.
“I can’t stress enough how important music is,” he says. “It builds relationships, unifies people and, most importantly, it’s fun.”