Media
Why Is It So Hard for New Musical Instruments to Catch On?
May 9th, 2012
Tags: instruments 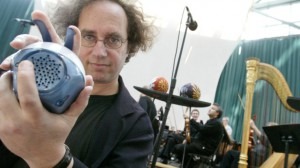 Composer and inventor Tod Machover poses with a Beatbug, a percussive instrument,
in a 2003 AP photo.

The turntable, invented 36 years ago, ranks as the most recently created music-making device with staying power. Have computers replaced the need for the next guitar?

Events like these would seem to signal a golden age for the adventurous musician. New instruments have come to market at a steady clip in recent years, offering novel and occasionally fanciful ways to perform music. Maybe you’ve heard of the the Eigenharp, the Tenori-on, or the Harpejji?

Or maybe not. Good luck hearing any of these contraptions on the recordings of prominent modern artists. You’re more likely to come across Tibetan singing bowls (Fleet Foxes), 17th-century Indonesian angklung (Okkervil River), or the zither (P.J. Harvey). In other words, established pop and rock musicians seem more inclined to try just about any instrument other than a new one. The turntable might be the last new implement to break into pop music; there’s even debate over whether that qualifies as an instrument, despite having its own form of notation and a course at Berklee College of Music. According to hip-hop lore, Grand Wizzard Theodore invented scratching 36 years ago. Suddenly, the turntable became a device used not just for listening to music, but performing it. And like the guitar, it turned into a focal point in live performances.

Now consider some of the instrumental developments in the 36 years prior: the solid-body electric guitar, the pedal-steel guitar, the steel drum, the electric bass, the synthesizer, and the drum machine.

Music technology in general has charged forward, and computers, digital sampling and MIDI have dramatically shaped music. But no one mimes to music on the “air sampler” and the idea of a “Software Hero” video game, with its own simulated laptop, is a little glum. Will a brand-new instrument ever capture hearts, minds, and speaker systems again?

THE PROBLEM WITH NEWNESS

It’s hard to overstate the importance of new musical instruments in history. The piano’s dynamic range allowed for a subtlety in composition previously unimagined. The modern drum set paved the way for jazz. Rock and roll would not have happened without the electric guitar. As composer Edgard Varese put it in 1936, “It is because new instruments have been constantly added to the old ones that Western music has such a rich and varied patrimony.”

So what happened? Why has there been such a drought of new instruments—especially in rock and pop, which thrive on novelty?

Inventor Aaron Andrew Hunt blames it in part on the “music industrial complex.” He created the Tonal Plexus in 2001 and has since sold, by his count, “not many.” With 1,266 keys, the instrument is designed especially for microtonal composition, so it would be a tough sell at just about any time. But Hunt said the deck is particularly stacked against new instruments now that a standard repertoire has been locked in, as has the popular idea of what a proper instrument is.

“The biggest barrier is the institutionalization of Western music and the mass marketing of all the instruments,” he says. “The problem is that no one can break though this marketing barrier and this education barrier because it’s become this machine.”

In the past, support from the establishment has made a difference in whether new instruments find a market. The research and backing of universities and corporations like RCA helped make the synthesizer happen. In Hector Berlioz, the saxophone got a major boost from a major composer. But many instruments have risen from very humble origins. The steel drum evolved from frying pans and oil cans after the Trinidadian government banned other musical instruments. Folks of limited means also turned household objects into music makers with washboards and turntables.

It might just be a symptom of modern life. We don’t have as much leisure time as we once did to learn a new musical instrument. And why would parents invest years and thousands of dollars into lessons for some newfangled instrument for which no music has been written, when the violin is right there? Even if so inclined, who would they find to teach it?

One of the most successful instruments of the 20th century skirted that problem when Robert Moog outfitted his synthesizer with a piano-style keyboard, giving the radical a touch of the familiar. Donald Buchla also developed his own modular synth at about the same time, but instead used pressure-sensitive touch plates on the principle that a new instrument should sport a new interface. Moog’s synths took off immediately; Buchla’s did not.

I’ve talked to a number of instrument makers, and frankly, it seems like a really hard way to make a living. Bankruptcy and years of strife are recurring themes in their tales. John Lambert, inventor of the Eigenharp—an elaborate device with a grid of keys and a breath controller that he spent eight years and millions of dollars developing—told me he keeps in his home a small museum of others’ failed musical instruments to remind him of the hard road he has chosen. Even successful instruments don’t always pay off for their creators. Bogged down by competitors’ bogus patent infringement claims on the saxophone, the destitute Adolphe Sax declared bankruptcy three times and appealed to the Belgium government for a stipend to live on. He did, however, survive two assassination attempts by rival instrument dealers.

But perhaps such a calling has less to do with making money than, say, propagating the species. Some of the oldest known artifacts are musical instruments, carved from the femurs of bears and woolly mammoth tusks. The oldest known musical instrument, dated to about 35,000 years ago, is a five-holed flute fashioned from a vulture’s wing bone. The archaeologists who discovered it in 2009 cited their find as evidence that instruments contributed to keeping humans in close social networks—and ultimately outlasting the more isolated Neanderthals.

Of course, our distant ancestors didn’t see the conundrum faced by today’s instrument makers. Digital technology gives musicians unprecedented access to a diversity of sounds. But instruments that use it run up against a common complaint that they lack expressiveness. The performer doesn’t get the immediate feedback that comes with a traditional instrument. Granted, a similar complaint was made about the piano—specifically, that its mechanics remove the pianist a few steps from the sound source.

“You can literally make any sound you can imagine, but the means of controlling them in real time have really lagged behind,” says Randy Jones of Madrona Labs, a company that’s rolling out its first instrument, the Soundplane, in the next few months. Jones boasts that the Soundplane, which goes for $1,695, has “a new interface that allows you to play the computer with the responsiveness of an acoustic instrument.”

Roger Linn, who invented the first digital drum machine in the late 1970s, also hopes to have his new creation, the LinnStrument, ready for sale sometime in 2012. Like Jones, he says his instrument bridges the divide between performer and technology. The LinnStrument features “three-dimensional” keys to allow for more nuanced expression.

Linn is one of the best-known instrument makers alive, but he realizes that this hardly guarantees the LinnStrument’s success. Even the violin would have a tough go of it, Linn says, were it invented today. You hold it under your chin (“that’s a horrible idea for an interface!”) and distances between notes get smaller the further up the fingerboard. It’s the perfect set-up for carpal tunnel and deafness in one ear. “It’d be laughed out of the music store,” he says.

REVENGE OF THE OLD, WEIRD INSTRUMENT

But not only are musicians ignoring new instruments, they’re taking up with some very old ones. Feist has used the nyckelharpa, a keyed fiddle that traces back to 14th-century Sweden. The Decemberists use bouzoukis (a sort of Greek lute), and Joanna Newsom has made the harp an unlikely indie music accessory. Its a rare article about Janelle Monae that doesn’t include the word “futuristic,” but the most futuristic instruments on her album are the Theremin (invented 1920) and the Mellotron (1948).

How did old, weird instruments become so popular? For this, I turned to Jeremy Barnes, who’s one half of A Hawk and a Hacksaw and a former member of Neutral Milk Hotel. He’s in New Mexico recording new songs with the help of a homemade hurdy-gurdy, a santoor (related to a cimbalom, which is related to the dulcimer), and an autoharp. Much of independent music’s burgeoning interest in exotic instruments of yore can be traced back to Neutral Milk Hotel’s influential In the Aeroplane Over the Sea, released in 1997. Barnes points out that the album came out around the time when home recording took off. “I think the process of working on recordings at home naturally leads a musician to explore new sounds,” he said in an email. “If you shy away from MIDI and computer-based sounds, then you have to start learning new instruments.”

The tricks of recording-studio auteurs like Phil Spector, Brian Wilson, and George Martin “are now being used by everyone from Dr. Dre to the 15-year-old kid in suburban Wisconsin.” And that, he says, freed people to move beyond “the homogenous Guitar Center-ization of Western music.”

But old instruments don’t make these musicians revivalists. Besides the ukulele, Merill Garbus of the acclaimed avant-rock act tUnE-yArDs is also known for her deft use of looping. Perhaps this is what Pierre Schaeffer, inventor of musique concrete, had envisioned: bold new music freed from the constraints of instruments. An extreme example is found in Matthew Herbert, who has made a career of fashioning a singular kind of dance music from unlikely sound sources: people eating, the chirps of chickens and, most recently, a pig. And maybe all my bellyaching about the lack of new instruments is its own form of nostalgia, a longing for cultural symbols irrelevant to the production of music today.

But new gadgets have their champions. Bjork, for instance. She’s brandished on stage futuristic devices like the Reactable and Tenori-on. For her latest album, Biophilia, she and her team invented instruments like the gameleste, a cross between the gamelan and celesta. This puts her in a small club of musicians, Tom Waits and Paul Simon among them, who have applied the DIY ethic to instruments.

Jordan Rudess, keyboardist for prog rockers Dream Theater, not only seems to have performed with every new musical device on the market, but has developed the impressively sophisticated music-making apps, MorphWiz and SampleWiz, for iPad and mobile phones. These and a handful of other apps suggest that there’s a real future for that kind of thing. The best-known instrument app is the Ocarina, developed by Smule. Whatever its limitations, the Ocarina reminds users that music doesn’t have to be a passive activity.

But it’s an open question whether a mobile device is much of an improvement over a laptop in a performance setting (imagine, for instance, Paul Simonon’s bass guitar replaced by an iPhone 4S on the London Calling cover). Many musicians now rely more on live performances for their revenue than their recordings. And while all those kids at Skrillex shows don’t mind that their idol spends a lot of time behind a MacBook screen, for plenty of other artists putting on concerts, an instrument helps.

At least, that’s what Jones of Madrona Labs is counting on.

“The tide is turning back to people wanting that live connection,” he says.