Media
Why hearing music is pleasurable
May 9th, 2011
Tags: research 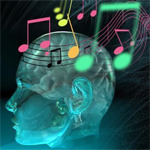 NEW YORK, (AP) — Whether it’s the Beatles or Beethoven, people like music for the same reason they like eating or having sex: It makes the brain release a chemical that gives pleasure, a new study says.


The brain substance is involved both in anticipating a particularly thrilling musical moment and in feeling the rush from it, researchers found.

Previous work had already suggested a role for dopamine, a substance brain cells release to communicate with each other. But the new work, which scanned people’s brains as they listened to music, shows it happening directly.

While dopamine normally helps us feel the pleasure of eating or having sex, it also helps produce euphoria from illegal drugs. It’s active in particular circuits of the brain.

The tie to dopamine helps explain why music is so widely popular across cultures, Robert Zatorre and Valorie Salimpoor of McGill University in Montreal write in an article posted online Sunday by the journal Nature Neuroscience.

The study used only instrumental music, showing that voices aren’t necessary to produce the dopamine response, Salimpoor said. It will take further work to study how voices might contribute to the pleasure effect, she said.

The researchers described brain-scanning experiments with eight volunteers who were chosen because they reliably felt chills from particular moments in some favorite pieces of music. That characteristic let the experimenters study how the brain handles both anticipation and arrival of a musical rush.

PET scans showed the participants’ brains pumped out more dopamine in a region called the striatum when listening to favorite pieces of music than when hearing other pieces. Functional MRI scans showed where and when those releases happened.

Dopamine surged in one part of the striatum during the 15 seconds leading up to a thrilling moment, and a different part when that musical highlight finally arrived.

Zatorre said that makes sense: The area linked to anticipation connects with parts of the brain involved with making predictions and responding to the environment, while the area reacting to the peak moment itself is linked to the brain’s limbic system, which is involved in emotion.

The study volunteers chose a wide range of music — from classical and jazz to punk, tango and even bagpipes. The most popular were Barber’s Adagio for Strings, the second movement of Beethoven’s Ninth Symphony and Debussy’s Claire de Lune.

Since they already knew the musical pieces they listened to, it wasn’t possible to tell whether the anticipation reaction came from memory or the natural feel people develop for how music unfolds, Zatorre said. That question is under study, too.

Dr. Gottfried Schlaug, an expert on music and the brain at Harvard Medical School, called the study “remarkable” for the combination of techniques it used.

While experts had indirect indications that music taps into the dopamine system, he said, the new work “really nails it.”

Music isn’t the only cultural experience that affects the brain’s reward circuitry. Other researchers recently showed a link when people studied artwork.