Media
Why arias in the multiplex fall flat
May 24th, 2013
Tags: opera 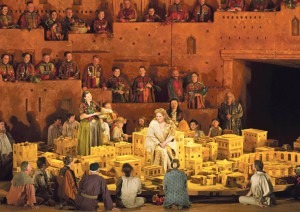 Les Troyens: in a cinema near you?

Screening operas at cinemas is helping to bolster the popularity of this frail art form, but it’s no substitute for the emotional intensity, acoustic quality and excitement of live drama

Last year, I attended a performance of Handel’s opera Rodelinda. With fewer than 200 seats in the venue there was no lengthy climb up to the balcony, no seat without a perfect view. And with no formal etiquette we dressed as we liked, and came and went as we pleased. Which was lucky, because about an hour into the performance I did something I’ve never done before: I walked out and didn’t come back. I doubt the performers took offence; they were 3,000 miles away in New York, and I was in acoustic exile in an art-house cinema in East London.

The Royal Opera has recently launched its second live cinema season. Nine productions will screen in some 900 cinemas across 32 countries. Vast figures for a cultural phenomenon still in its infancy, and dwarfed by New York’s Metropolitan Opera, whose 2012/13 season will reach an astonishing 1,500 screens in no fewer than 46 nations – a global operatic empire that extends from Columbia to Croatia, Egypt to Ecuador. Even Glyndebourne, that bastion of cultural conservatism, first screened its festival operas in UK cinemas in 2007.

Cinema, the cry goes up on all sides, is the future of opera. This is the technological crutch that can prop up an increasingly frail art-form, the digital panacea that can restore life to a cultural anachronism. Statistically the figures seem to bear this out. The Financial Times recently estimated the Met’s annual income from its screenings at $11 million, and last year their worldwide audience numbers reached around 3 million. But as so many operatic heroes learn, riches always come at price. So what is the cost of opera’s cinematic double-life?

Whether we think of opera in terms of Wagner’s grandiose Gesamkunstwerk (a total work of art) or, as Franco Zeffirelli put it, “… a planet where the muses work together, join hands and celebrate all the arts”, there’s no denying the unique breadth of a genre that binds ear, eye and mind into a single sensory experience. “Immersive” might be the latest and most fashionable buzzword for visual and performance arts, but opera has been offering this all-encompassing artistic stimulation for more than 400 years, with 3D as standard – no special glasses required. When we take this sprawling, generous art-form and flatten it into the confines of a cinema screen we rob it of its live excitement, and of life itself.

In an age in which we digest more and more of our culture digitally, it’s vital that we preserve public rituals of performance. Because they are rituals, these trips to Covent Garden or the Coliseum, where you feel the breath of a climactic chorus on your face, where the fragile stillness of an aria can hush an audience of 2,000. Whatever we experience in this shared, public space is amplified a thousand-fold by the reactions of those around us, whether on stage or off. There’s an energy, a risk, to this nightly act of creation that is impossible to simulate. We already have opera singers translated into 3D cinematic doubles, but until these shadowy doppelgangers can reach out and touch us physically, they can’t truly hope to emotionally either.

In outsourcing opera to cinemas, we leave a demanding art-form at the mercy of second-rate sound-systems and flat acoustics that simply can’t carry the weight of singers trained to fill huge halls without amplification. These broadcasts privilege the lower voices – bass, contralto – over sopranos and tenors, whose higher registers often jangle or distort in delivery. Voices also lose much of their personality when parcelled up into digital formats, a phenomenon the recording industry has already numbed us to.

Would I advise someone curious about opera to experience it for the first time at a Met screening? Never. Opera broadcasts are to live opera as Walt Disney’s original fantasy of Epcot was to America; everything might be visually tidier, more convenient, more heightened in close-up, but it’s also hollow – a cartoonish reality. Opera companies claim their broadcasts will attract a new audience, enticing the young and culturally timid where traditional methods have failed. A 2008 survey by OPERA America however identified just 5 per cent of the audience for Met live broadcasts as those who had never been to live opera. The bulk of the ticket-holders were those “moderate and frequent opera-goers” you’d see most weeks in the Met’s own stalls, or those of opera houses across the world.

This raises the more practical side of opera in cinema. For many regional opera fans, or those in remote areas, the opportunity to see live opera is small, and these broadcasts tap in to an audience for opera that might not otherwise exist. It’s a compelling argument, but one whose very strength may be the downfall of opera. What happens when digital audiences routinely outnumber live ones? What happens when cinema screenings subsidise performances, as they are beginning to do? Surely the temptation will be to start catering to this new format, designing productions around what works best in the new medium, casting according to Hollywood’s standards rather than musical ones. David Sabel, head of digital media at National Theatre live, recently referred to audiences at the National Theatre for live-broadcast performances as “effectively a ‘studio’ audience” – a dangerous precedent and one echoed in the BBC Proms’ acoustic favouring of radio listeners over those in the Royal Albert Hall.

English National Opera’s artistic director John Berry spoke this year of his fear that broadcasting opera in cinema would “distract from making amazing quality work”. His rare and avowed lack of interest in the phenomenon typifies a company determined to reform opera from within rather than risk damaging its essential fabric through the cultural grafting of one genre onto another.

To those who say that opera must move with the times, I respond that it absolutely must. So let’s bring the innovations of cinema into the opera house itself. If we follow the lead of director-auteurs like Terry Gilliam, David Bosch and Peter Sellars, we can create an even grander, more all-embracing Gesamkunstwerk than even Wagner could conceive. Rather than let technology dilute the essence of opera let it enhance it, use it to grow the genre into something recognisably contemporary yet authentically operatic.

Alongside this we must revisit that neglected creature the opera-film. Joseph Losey’s Don Giovanni, Ingmar Bergman’s The Magic Flute and Zeffirelli’s La Traviata: these are as far from the sanitised, compromised opera broadcasts as can be imagined, a genuine hybrid of art-forms that amplifies opera through cinema and cinema through opera. Isn’t that what the digital age is all about?