Media
Why are pop songs getting sadder than they used to be?
August 19th, 2020
Tags: society 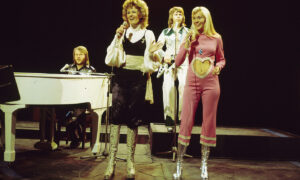 Happier days: Abba performing ‘Waterloo’ on Top of The Pops in 1974. Photo by Redferns/Getty

Are popular songs today happier or sadder than they were 50 years ago? In recent years, the availability of large digital datasets online and the relative ease of processing them means that we can now give precise and informed answers to questions such as this. A straightforward way to measure the emotional content of a text is just to count how many emotion words are present. How many times are negative-emotion words – ‘pain’, ‘hate’ or ‘sorrow’ – used? How many times are words associated with positive emotions – ‘love’, ‘joy’ or ‘happy’ – used? As simple as it sounds, this method works pretty well, given certain conditions (eg, the longer the available text is, the better the estimate of mood). This is a possible technique for what is called ‘sentiment analysis’. Sentiment analysis is often applied to social media posts, or contemporary political messages, but it can also be applied to longer timescales, such as decades of newspaper articles or centuries of literary works.

The same technique can be applied to song lyrics. For our analysis, we used two different datasets. One contained the songs included in the year-end Billboard Hot 100 charts. These are songs that reached wide success, at least in the United States, from The Rolling Stones’ ‘(I Can’t Get No) Satisfaction’ (in 1965, the first year we considered) to Mark Ronson’s ‘Uptown Funk’ (in 2015, the last year we considered). The second dataset was based on the lyrics voluntarily provided to the website Musixmatch. With this dataset, we were able to analyse the lyrics of more than 150,000 English-language songs. These include worldwide examples, and therefore provide a wider, more diverse, sample. Here we found the same trends that we found in the Billboard dataset, so we can be confident that they can be generalised beyond top hits. Full story.