Media
Whose language is opera: the audience’s or the composer’s?
July 1st, 2011
Tags: opera 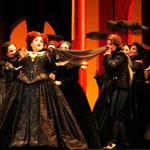 THE question of whether opera should be performed in the language that most of the audience speaks, or in the language in which it was originally written, is an extremely contentious one.


Highly volatile discussions in opera foyers often spill out into the street where gesticulating aficionados argue passionately for their preferences. And that’s before they start arguing about the singers!

When Mozart wrote The Magic Flute, or Die Zauberflote, the librettist was a certain Emanuel Schikaneder, a theatrical impresario, actor, singer and composer in Vienna at the time, who also sang the role of Papageno in the first performances which began on September 30, 1791.

Die Zauberflote was performed in German and it was a show that Schikaneder and Mozart decided to do as a popular entertainment with dialogue and music.

Mozart and Schikaneder called it a singspiel that today would be called music-theatre, so it was vital that the audience understood all the text.

For many years Wagner’s operas, when performed in Italy, were sung in Italian with Wagner’s blessing and the operas of Janacek have been sung in English in English-speaking countries until very recently.

Composers have always wanted their work to be performed in the language that most of the audience speaks.

It would then seem logical that every opera company in the world would adhere to the composer’s wishes and perform their masterpieces in the language of the people who make up the audience.

However, not one major opera company in the world does this.Why not?

At a time when an enormous amount of work goes into researching original performance techniques — even ensuring that baroque music is played on period instruments in order to be faithful to the composer’s wishes — we ignore the desire of those composers to have the audience understand what is being sung.

But what if the technology that enables us to enjoy surtitles, which most opera companies now use all over the world, had been available to Verdi, Puccini, Wagner and Mozart?

Quite obviously we will never know the answer to that question, so the choice of whether or not to perform La Boheme in English or Italian, for example, now rests with the opera company that is performing the work.

Personally, I have no doubt that the articulation of the Italian text when aligned to Puccini’s music is a far more satisfying experience than when it is sung in English, no matter how interesting the translation.

When Cavaradossi stands up in the second act of Tosca and sings those thrilling high B-flats — “Vittoria! Vittoria!” — the vowel sounds and music are perfectly connected. To sing “Victory! Victory!” simply doesn’t have the same emotional, musical or dramatic intensity and consequently I don’t believe the opera would have the same power as the composer intended.

Then there is the example of Leos Janacek, the wonderful Czech composer whose musical language is based on the speech rhythms of his native Czech dialect. When his operas are translated into another language it makes a nonsense of one of his primary motivations. The notes that Janacek wrote relate completely to the words and the inflections of his Czech dialect, so how can his work be performed with complete integrity when it’s translated?

There is also a tendency for translators and directors to take artistic licence and change the translation to suit their particular interpretation; and sometimes the original text bears very little relation to what the audience hears in the new production.

Consequently, the original intent of the composer and librettist can disappear almost completely.

There is also the question of the fundamental differences in languages, particularly the subtleties that are apparent in the original but get totally lost in translation.

The music of the great Italian opera repertoire is particularly suited to the Italian language; it’s a more expressive and frankly musical language than English.

When you have the hardness of the English language articulating music which was written with the expressiveness of the Italian language in mind, it sounds peculiar and that detracts significantly from what was intended by the composer.

The audience then does not enjoy the total experience that this passionate combination of text and music brings.

And what would be the choice when western opera is performed in India or mainland China? Should Il Barbiere di Siviglia be performed in Mandarin? Or Cantonese?

I have made a case for the Italian language but similar arguments apply to the use of German, French, Russian and other languages which make up the operatic canon.