Media
Where the Craftsmen Are Women
September 10th, 2014
Tags: instruments 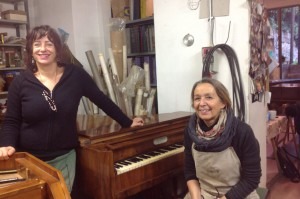 Situated across the Arno River from Florence’s more heavily trafficked tourist attractions in what was a 16th-century refuge for the poor, via di Camaldoli remains a street without a hint of glamour. Yet hidden treasures lurk here.

At No. 7, behind an unadorned entrance, is the Accademia Bartolomeo Cristofori, named for the man who, in 1700, invented the piano while in the employ of Florence’s Prince Ferdinando d’Medici. The academy’s long, narrow hall is home year-round to concerts, lectures and scholarly meetings, along with a permanent display of historic instruments by the likes of Conrad Graf and Ignace Pleyel, whose customers included Beethoven, Chopin and Schumann. In one corner sits Viennese maker Matthias Müller’s odd “Ditanaklasis,” in which two keyboards are melded back-to-back.

But next door, at No. 9, a visitor is in store for perhaps an even greater surprise. The former ironworks factory is now home to the Laboratorio di restauro del fortepiano—where ancient pianos are conserved, restored and offered for sale. It is an uncommon enough enterprise, made even more rare here: At the Laboratorio, all the craftspeople are women.

“It was not so uncommon in the past,” says Donatella Degiampietro, 66. “We have the example of Nannette Streicher, a leader of a wonderful piano firm.” As a young girl, Streicher charmed Mozart and later became a favorite of Beethoven. “But when we started out [in 1993], customers were sometimes shocked to find three women working in early-piano restoration. In the beginning, people in Florence looked at me strangely when I tried to buy a box of nails. Thankfully, attitudes have been changing.”

The three protagonists of this venture—Ms. Degiampietro, Antonella Conti and Barbara Mingazzini —have had their share of challenges. Whether the task has been to restore an instrument to playable condition or, in the case of museum displays, merely to preserve the historic details so experts can study how things were done, they have faced endless hurdles. The pianos are often in precarious states, with corroded or missing parts, deteriorating wood or structural damage. And the restorative process involves both scholarly research and detective work—in addition to delicate craftsmanship.

“Whenever an instrument arrives, we make a kind of analysis,” says Ms. Degiampietro. “We decide what we can leave, what we can keep, what is original, what has previously been repaired. We have to calculate the best possible stringing, for example. There are various firms around the world from which we buy either iron, brass, tin or copper. And every action part has its own geometry and materials. The hammers are a good example: English square pianos often used rabbit felt, but sometimes they used sheep leather with different kinds of tanning. Or deer leather—and there could be as many as eight or nine layers on top of the hammer. Sometimes we just can’t find the right leather—the recipes exist, but no one is still making it the old way, which requires too much time. So we have to reuse materials from keyboards that can’t be restored.”

Then there are very special cases, like the exotic “bassoon” stop on some early pianos that produces a buzzing sound by bringing a piece of material into contact with the strings. I always assumed parchment would be involved. “No,” replies Ms. Degiampietro. “Parchment is too hard. It has to be stiff enough to make the buzz but, at the same time, move with the string. The right material is actually made from a thin covering found over a specific part of a cow’s intestine. But you can’t just ask a butcher for it. So Antonella went looking in a well-known book-restoration center in Florence, run by friars. It turns out they use it in bookbinding, because it is incredibly strong.”

Some materials are simply unobtainable. “In old English pianos, the mechanism sometimes used whalebones,” she continues. “That’s difficult to find. So we looked for old corsets in costume shops, because sometimes they contained whalebones. At one point we ended up in the theater, looking at everyone’s corsets.”

The seed of the idea for this shop was planted in 1985, says Ms. Degiampietro, when Stefano Fiuzzi, artistic director of the academy next door, was attempting to create an early-piano center in Florence. A Florentine patron, Alberto Milla, backed the enterprise.

Ms. Degiampietro was the perfect candidate for the task. She had previously studied sculpture and painting and worked on restoring an organ in Florence’s Pitti Palace before apprenticing at the Smithsonian Institution, under conservator Scott Odell, and at the Metropolitan Museum in New York, under instrument expert Stewart Pollens. Soon after Mr. Fiuzzi’s enterprise opened its doors, Ms. Conti, an expert in wood carving and inlay, and then Ms. Mingazzini, who specializes in tuning, joined the team.

Asked if she has a favorite keyboard memory, Ms. Degiampietro is hard pressed to make a choice. “One that especially moved me was the Domenico Del Mela —the first-ever vertical piano,” she states. “It was so experimental. The hammers were made like horse-hooves. The mechanics were extraordinary. When I looked at it, I could see the thinking that went into it. But I have to say that every keyboard I’ve touched has brought me happiness. They all move me.”