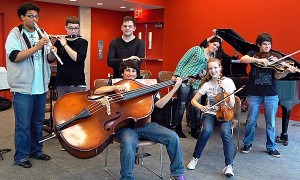 The composer Nico Muhly, center rear, with members of Face the Music.
The group focuses on works from
the last 50 years, with an emphasis
on the new alt-classical.

AT first glance the ensemble setting up in a fifth-floor classroom at the Kaufman Center on West 67th Street in Manhattan seems like any other student group and exactly what you would expect to find in a building that houses two music schools and Merkin Concert Hall. Teenage string and brass players tune their instruments and play fragments of pieces they are working on; saxophonists see to their reeds; percussionists contribute spiritedly to the din; and a guitarist and a bassist quietly pluck figures from the scores on their music stands.

But when the conductor, Jenny Undercofler, using a pencil as a baton, leads her Face the Music ensemble through Steve Martland’s rhythmically pointed, texturally jagged “Horses of Instruction,” you realize that this is not the sort of student orchestra you may remember. It is instead an alternative-universe high school band: a new-music factory that focuses on works written in the last 50 years, with an emphasis on the new alt-classical style. Its musicians, who began studying new music before anyone had told them that it was incomprehensible or unlikable, are thrilled to play it, and their spirit has impressed composers whose music they perform.

“Writing for a kids’ group is like throwing a pass in football,” said Phil Kline, whose “Exquisite Corpses,” composed for the adult virtuosos in the Bang on a Can All-Stars, is part of Face the Music’s repertory. “You don’t want to throw it behind them, or too far in front, but so they can reach it. But here was this group working on a piece with a clarinet part written for Evan Ziporyn and a guitar part for Mark Stewart, extraordinary players, and they did a great job. There was no sense of boredom or squirming. They were totally focused and committed.”

Now in its seventh year Face the Music has 74 members, up from 8 when Ms. Undercofler started it in 2005. It began as a project of the Kaufman Center’s Special Music School, a public school for musically gifted children from kindergarten through eighth grade. (The school will add grades nine through 12 in 2013.) But the group quickly expanded to take in musicians from all over the New York region, from Grades 5 through 12 (roughly, 11 to 17 years old).

They attend a three-and-a-half-hour rehearsal at the Kaufman Center every Sunday, and they have a busy concert calendar that has made Face the Music a force in the New York new-music world. In 2011 the American Society of Composers, Authors and Publishers presented its Aaron Copland Award to Ms. Undercofler and her musicians “for the artistry and passion with which they champion and perform the music of living composers.”

Since January, Face the Music has performed at the Queens Museum of Art, Lincoln Center’s David Rubenstein Atrium, Roulette, St. Malachy’s (the Actor’s Chapel) and as part of the Ecstatic Music Festival at Merkin Concert Hall. Its busy spring schedule includes a reading of a movement of Steve Reich’s Double Sextet at the Kaufman Center on Sunday, a concert at St. Malachy’s on Monday, and performances at the Tribeca Music Festival, the Tank, the First Presbyterian Church of Brooklyn and Firehouse Space in Brooklyn in April; and in El Museo del Barrio and outside Merkin, as part of the daylong Make Music New York Festival, in June.

Ms. Undercofler’s group has few competitors. The Contemporary Youth Orchestra, a 115-player ensemble of 13-to-18-year-olds, based in Cleveland and led by Liza Grossman, is now in its 17th season. It is a conventional orchestra: no guitars, electronics or other indie-classical accouterments. Formerly Known as Classical, a teenage chamber group in San Francisco, explores a repertory similar to Face the Music’s.

Ms. Undercofler, a pianist trained at the Juilliard School and the Eastman School of Music in Rochester, joined the staff of the Kaufman Center as the music director of the Special Music School in 2004 and started Face the Music as an experiment in 2005 by putting up a poster advertising the group as an after-school new-music club.

“It wasn’t exactly a prank,” Ms. Undercofler said, “but I wanted to see if anyone would sign up. The kids here are very serious, very devoted to their studies, and that first year I got eight kids who were, honestly, misfits or rebels of one kind or another.”

There were administrative doubts to overcome, said Lydia Kontos, the executive director of the Kaufman Center: “I was very committed to new music at Merkin Hall. But I also felt that a lot of new music sounds like being inside someone’s head. One of the great things about Jenny is that she does a lot of deep thinking about what’s being done, and she made it so clear to me what the possibilities were for contemporary music from a pedagogical standpoint.”

At first Ms. Undercofler shared the group’s direction with the composer Huang Ruo. He got his charges started with Mr. Reich’s “Clapping Music,” he said, “so that they could relate to making music with their bodies, rather than with instruments.”

“I think the students who joined knew what they were getting into,” Mr. Huang added. “They were very interested and had open minds, and also parents who were very encouraging. That’s important with young students.”

When Mr. Huang left the school for a position at the State University of New York at Purchase, Ms. Undercofler decided to lead the ensemble on her own. And working on Terry Riley’s seminal Minimalist work, “In C” (1964), which briefly became a signature piece for the group, she identified crucial problems. Mr. Riley’s score contains 53 short melodic cells, played against a steadily pulsing C. The performers repeat the cells, each deciding when to move on to the next, and though no duration is prescribed, most readings take from 45 minutes to an hour.

“At first,” Ms. Undercofler said, “they couldn’t make it last 20 minutes. I made them take out a watch and pace themselves. And then, during the second year, when we had a few more kids, all of a sudden they broke through, and it took 45 minutes to play the piece. They were so excited, and after that it was anybody’s guess: 70 minutes, 75 minutes.”

Since then Ms. Undercofler has moved on to more complicated pieces, though still mostly from the downtown canon. Last year Face the Music performed Mr. Reich’s “Tehillim” with Alarm Will Sound; this year Philip Glass’s “Glassworks” is the centerpiece of its programming. Its expanding playlist also includes works by Nico Muhly, Missy Mazzoli, Angélica Negrón, Lev Zhurbin, JacobTV, Graham Fitkin, Osvaldo Golijov and Gérard Grisey, as well as oddities like Ligeti’s “Poème Symphonique” for 100 metronomes (1962), a piece that involves winding up and starting the metronomes and letting them run down.

“Getting a group of teenagers to start the metronomes silently and walk away is harder than it looks,” Ms. Undercofler said when asked about the score’s pedagogical value. “And for kids whose idea of music had been about learning the Vivaldi A minor Violin Concerto, doing a piece about starting 100 metronomes was kind of a cool way to provoke them.”

Other projects were tougher in more traditional ways. In 2008 Ms. Undercofler began preparing Michael Gordon’s “Yo Shakespeare” for a program in the Wordless Music concert series, but as the performance date approached, she realized that the rhythmically complex score was beyond her players, a problem she addressed with a few six-to-eight-hour marathon rehearsals.

Some of the players described “Yo Shakespeare” as a turning point.

“I was 10 or 11, and the first piece I was exposed to in Face the Music was ‘Yo Shakespeare,’ ” said Addison Manion, a 16-year-old saxophonist who studies at the Frank Sinatra School for the Arts in Queens. “And when I first heard the recording, I shut it right off. It scared me. I was unfamiliar with the timbre, the rhythms, the strange intervals. It was very bizarre to me. But after a few rehearsals I thought I should give this piece a listen, and I became enthralled with it. I began to really appreciate the oddness of the sound.

“Now everything is a barrel of monkeys. Like ‘Tehillim,’ last year. If I had played ‘Tehillim’ my first year, I wouldn’t have enjoyed it as much, but after so many years of becoming familiar with contemporary music I love that piece. I still listen to it every day.”

Where possible Ms. Undercofler enlists professional musicians to work with the group. David Harrington of the Kronos Quartet has coached the more advanced string players, and last year’s performance with Alarm Will Sound persuaded Ms. Undercofler that collaborations can be particularly instructive. Plans are in the works to perform Mr. Reich’s Triple Quartet with the JACK Quartet.

Ms. Undercofler’s most frequent guests are composers, whom she invites partly to answer specific questions about their music but also to reinforce the idea that the music the ensemble plays was written by real people the players can meet and speak with. Composers have found these meetings enlightening as well.

“There were the usual questions about my intentions,” Mr. Muhly wrote in an e-mail. “There was, I think, an instinct to please rather than to necessarily interpret, which I tried to quickly dispel, and it worked out really well. It was clear also that whatever strange social dramas were happening in high school both informed and were undermined by the process of making chamber music, which is the best possible outcome, don’t you think?”

Mr. Muhly said that he found the players undaunted by complex rhythms. That, Ms. Undercofler said, is true of young musicians generally.

“There is a limit to their tolerance for dissonance,” she added. “And they don’t respond well to works without a pulse. But they pick up polyrhythms and complicated patterns easily. If there’s a pulse, you can get quite complicated and relatively dissonant on top of it.”

If there is one area in which Face the Music could be faulted, it is its neglect of serialism and other post-tonal styles. Ms. Undercofler is considering exploring that side of the repertory; Charles Wuorinen’s “New York Notes” is among the scores she is looking at for a future season.

She is also encouraging composers in the ensemble to write for it, and one, Joe Jordan, a 12-year-old pianist, has submitted a piece that he described as “kind of atonal.” But mostly she expects the group’s repertory and mission to continue unchanged.

“So many doors have been opened to these kids over the last few years,” she said. “They’re able to say, ‘Wow, I can participate in real, live musical life, and I’m 14.’ That’s an empowering experience. If they go to Juilliard, great. But I also want them to feel that if they go to school to study something else, this experience will be so much a part of them that they will still think of themselves as musicians.”