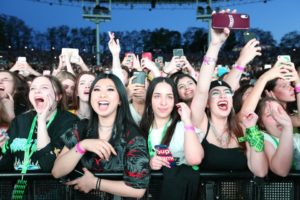 According to scientists, people enjoy music that has some familiar elements as well as surprises. These Billie Eilish fans at a concert in Toronto could probably relate to that as a general description of Eilish’s music, but scientists have now found a way to matematically describe how “predictable” a tune is, and showed that people’s favorite music is neither too predictable, nor too complex.
(Steve Russell/Toronto Star via Getty Images)

What’s your favorite music? According to scientists, the song that you have on repeat is probably both predictable and unpredictable at the same time.

For example, there are certain chord progressions that occur very often, which contribute to the predictable nature of music. But at the same time, you don’t want it to be too predictable. An occasional surprise note, dropped beat, change in tempo or key change keeps the music interesting. The combination of familiarity and surprises ultimately leads to the activation of reward centers in the brain. Put simply: you like that tune. Full story.