Media
What does a music festival say about you?
August 20th, 2010
Tags: research, society 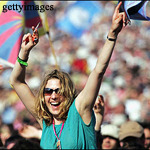 The season for music festivals is about to kick off, with seemingly more people going than ever before. But what does your choice of festival say about you?


Glastonbury, Bestival, the Big Chill, Latitude, Reading? Which wristband will you be flashing at friends and work colleagues this summer?

It’s safe to say music festivals are now an established part of British summer time. There are 450 in the UK alone this year and more people are going to them than ever before, says Virtual Festivals UK.

They used to be about leaving the social snobberies and constraints of everyday life at the gate. The mud and general madness was a great social leveller. Banker or buddhist, everyone was in it together. Now many are sponsored by big corporate brands and money can buy you luxury unimaginable years ago – tipi with shower and double bed for £3,000 anyone?

“They are completely mainstream now,” says Caspar Llewellyn Smith, editor of the Observer Music Monthly magazine. “Glastonbury is a national institution. It’s like an advertisement for the Somerset Tourist Board.”

But with so much choice and such a range of “experiences” on offer, where you go says more about you than ever before. It’s why people continue to wear the wristbands for weeks afterwards, it’s about making a statement.

“Your choice definitely says something about your identity,” says says Professor George McKay of the University of Salford, who has written extensively on festival culture, including the book Glastonbury: A Very English Fair.

“I often make the point that people don’t go to festivals for the music, which is a secondary attraction. They go because of the mass experience, the event itself. Some festivals are simply ‘cool’ and others not.”

And it’s basic human nature that many of us want to surround ourselves with like-minded people at festivals – it’s life affirming.

“For some, membership of a tribe gives them self esteem,” says Professor Adrian North, director of psychology at Heriot-Watt University. “If you are with people you think are cool it reaffirms your own lifestyle choices – you’re basically patting yourself on the back.”

So what are these festival tribes?

“If you go to Glastonbury or WOMAD you are probably interested in ethical issues around the environment or multiculturalism or a global consciousness. You may even have an organic allotment,” says Professor McKay.

“If it’s Latitude you’re a bit older and possibly taking the kids, but don’t want to be too uncomfortable – perhaps thinking you’d like to hire one of those tipis.”

Those who work in the festival industry agree divides exists. Reading and Leeds are a teenage rite of passage and all about the music, says Daniel Fahey, editor of Virtual Festivals UK.

“The Isle of Wight festival is about big heritage acts like Paul McCartney, so attracts a slightly older crowd. The Big Chill is for the former rave generation who are now in their 30s and Bestival is still a bit hippy, with fancy dress and healing fields”

The increasing divides are something canny festival organisers have seized upon in order to survive what is now a very crowded market.

“The scene reached saturation point and it’s now maturing and segmenting,” says Caroline Jackson, a lecturer at Bournemouth University, who is doing a PhD on music festivals. “Individual festivals are now increasingly recognised for what type of experience you get there. Certain groups go to certain festival.”

Glastonbury, the biggest and best-known festival, has cleverly adapted by expanding to offer something for everyone, she adds. It has segmented within the festival itself. The diversity means people go to the same festival but have completely different experiences.

The changing nature of the scene has triggered very heated debate about authenticity and what a “real” festival is, says researchers. Is it a one-day shindig in a London park or a three-day party in Somerset with healing fields and heavy rock?

One post on an internet message board moans about a family spotted enjoying a cheese board in a comedy tent at one festival. Another complains of people’s “fake sentiment”, while pushchairs, middle-aged people and “tame” band line-ups also get slated.

“There’s a huge amount of snobbery when it comes to festivals these days,” says journalist Alice-Azania Jarvis, who writes for the Independent.

“The reputation of a festival is more important to some people than the acts who are playing. If watching your favourite band means standing in a field of people who look like mobile-phone salesmen, then some people will decide not to go. It’s not what you’re watching, more who you are watching them with.”

It’s inevitable when something becomes mainstream, like a festival, it loses its credibility among some people, says Prof North.

“If your sub culture sets you apart, once everyone else joins in it no longer makes you different. You’re just normal.”

But researchers say one thing has not changed and spans the divides – the temporary escape from the mundane routine of everyday life.

“Young people like festivals to experience the freedom of youth and their own new music, and older people like them too, trying to remember their own youth, not least by seeing their favourite bands reforming,” says McKay.

“And that kind of child-like freedom is a great part of the promise of any festival: outdoors, open air, camping in the countryside, music and other arts, with a group of like-minded people, seeking relaxation or excess.”

Put that way, it sounds so good.