Media
What does a conductor do, anyway? A music critic lays it out.
April 29th, 2020
Tags: conductors 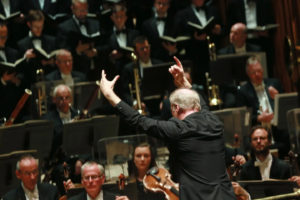 Classical music isn’t always welcoming to newcomers. People who dare to ask questions about the genre tend to preface them with a lot of apologies for their own ignorance and for how stupid they assume their question is going to sound. But once we get past that, there’s one question I hear again and again.

Why does an orchestra need a conductor? And what, exactly, does a conductor do?

It’s not a stupid question. Plenty of people ask it. Whole books have been written on the topic, such as John Mauceri’s recent “Maestros and Their Music,” one conductor’s smart and engaging view of the art. Musicians joke about it — warning colleagues not to look at a conductor they dislike, since his podium antics may prove a distraction to playing the music. Then there are orchestras that play without conductors, including the New York-based Orpheus Chamber Orchestra. Such groups sound very good, but when I hear them play with a soloist, I often come away feeling that something is missing. Full story.