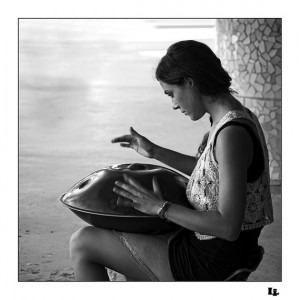 The manufacturers of the world’s handpans don’t want to turn to mass production. The result: Super-long waiting lists to get one of these rare steel orbs.

Josiah Collett, a 10-year-old autistic boy from Broxbourne, England, had always struggled with social interactions. But things were getting worse. In school, his peers told him that he shouldn’t be alive. He spent nights crying, unable to explain to his parents what had happened.

During a family vacation to Belgium, the Collett family heard a “gorgeous, hypnotic sound” coming from the distance. They followed it down the street and found a busker playing something that looked like a cross between a caveman tool and a flying saucer. The busker tapped the instrument, called a “handpan,” which emitted both drum-like rhythms and delicate harmonies.

The mix of percussion and melody intrigued Georgia, Josiah’s mother. Josiah was always preternaturally talented when it came to music—he taught himself to play drums when he was two years old—and Georgia wondered if this new instrument, which so resembled a drum but was more expressive, might be good for Josiah.

The family went to a handpan gathering in the UK, and a musician handed Josiah one of his instruments. Josiah put it in his lap and began to play. Ethereal music filled the scene, and people gathered to admire his impromptu performance. Kyle Cox, an onlooker, was moved.

“It was like he channeled something inside he wasn’t able to get out with words,” recalled Cox. “Mindblowing.”

The musician asked Josiah how long he’d been playing. He was shocked to learn Josiah had never before tried the instrument.

“At that moment, I discovered what I was born to do,” said Josiah.

Yuki Koshimoto, one of the most popular handpan musicians on YouTube

The handpan may look like a Stone Age relic, but it was actually invented about a decade ago by Swiss artists Felix Rohner and Sabina Schärer. The two were steelpan makers, and they came up with a new instrument, which they christened the “Hang” meaning “hand” in Bernese German.

Rohner and Schärer formed their company, PANArt, to sell their creations in 2000. Requests started pouring in, and soon they couldn’t meet demand. They received thousands of inquiries annually, but they only made a few hundred instruments each year.

The artists didn’t want to mass-produce their handpans, so they did something novel: They required prospective customers to write hand-written letters. A chosen few were then invited to the PANArt workshop in Switzerland (they had to furnish their own travel expenses), where they bought their instruments in person. While there, buyers learned about the history and use of the Hang, as well as how to care for it.

Rohner and Schärer are reclusive. They avoid interviews and shun attention. Not everyone likes this attitude; some handpan players argue that they should be more transparent and take on apprentices.

“I feel they never wanted the celebrity that ultimately came to them,” said Cox. “Instead of embracing it, they chose to focus within so not to get distracted from their work. That’s my take anyway.”

Rohner and Schärer have since stopped making the Hang and are now busy creating the Gubal, a new instrument that will be up for sale in the coming months.

As PANArt started garnering attention, and with demand so far exceeding supply, other companies started trying to replicate the instruments. Cox, a former steelpan maker, met his business partner at a local tool-building company. Jim Dusin, a contractor, came in to the shop for a meeting while Cox happened to be working on a steel drum. Dusin watched him hammer the steel into shape.

“He kept shaking his head,” remembers Cox. “When I stopped and asked him what he was thinking, he said ‘I can figure out a better way to do that.’ ” What was supposed to be a 15-minute meeting turned into a whole day. “We were both late for dinner that night.”

The two went on to invent the Halo, their version of PANArt’s Hang, and started their own company, Pantheon Steel, to produce them. They also coined the term “handpan” to describe the new instrument. (“Hang” specifically refers to the PANArt handpan.)

A dozen or so other companies have materialized since then, but the industry is not like others. In fact, it may be one of the strangest of its time: Companies practically push away customers, and “competitors” don’t really compete with one another.

“We’re really a big family,” Cox said. “There’s always going to be proprietary things about a business or operation, but we tend to share much more than we keep secret.”

But the reliance on craftsmanship suppresses supply: It takes years to learn to build a handpan and requires patience, physical strength, dexterity, and a pitch-sensitive ear, explains Cox, whose company Pantheon Steel sells parts for individuals who want to try home assembly. These sales come with a warning that make handpan creation sound more like war than retail:

We want you to know, before we accept a single cent from you, not everyone will be successful …

Learning to make a playable instrument will almost certainly require hundreds, even thousands, of hours of practice and experimentation. Expect countless missteps, and expect to fail before you succeed …

It’s going to take much more than (a lot of!) money. It’s going to take time, sweat, pain, aggravation, disappointment, determination, faith and a single-minded love for the art form.
And yet, the manufacturers also don’t want to increase prices, which already range from the high hundreds to low thousands, which would make them only affordable to the wealthy. So the companies all stick to a highly unusual business model: They rely on waiting lists and lotteries.

People on the lists wait anywhere from six months to three years. The situation is getting more extreme: Some handpan performance videos have gone viral, and more and more people are becoming obsessed. There are whole websites devoted to explaining how to acquire one of the orbs.

After hearing Josiah’s impromptu performance, his parents knew they had to get him a handpan, but they couldn’t figure out how. The waiting lists were too long, and the secondhand ones on eBay cost thousands of dollars. The Colletts posted in a handpan forum, asking for advice.

The family started getting calls and emails from a Spanish man named Luis Eguiguren. They couldn’t get past the language barrier, and they ignored his messages. Georgia happened to mention him to Cox, who explained that Eguiguren was an artisan in northern Spain who made the BellArt Sound Sculpture (Eguiguren prefers the term sound sculpture to handpan). Eguiguren had a three-year waiting list, and he wasn’t even accepting new customers. He was willing to make an exception for Josiah, but the Colletts would have to go to his workshop in Spain for it.

And so they found themselves wandering through the Spanish mountains for hours, lost and tired. They were on the verge of giving up when a woman asked a passing car for directions on their behalf. The car driver shouted, “I’ve been looking everywhere for you!” It was Eguiguren. He drove them to his workshop and Josiah finally got his instrument.

“It was nothing short of a miracle, really,” says Georgia.

Since getting his BellArt, Josiah, now 13, has transformed into a calmer, happier boy who comes out of his own mind to be with other people. His confidence has gone through the roof, and he’s met a lot of friends through the handpan community.

“It’s completely changed his world,” says his mom. “He’s with us again.”