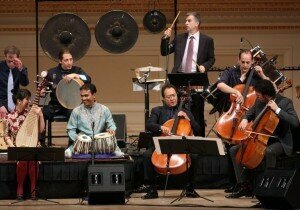 Yo-Yo Ma, the third cellist from right, and other members of the Silk Road Ensemble, at Carnegie Hall in 2013.
Credit: Hiroyuki Ito for The New York Times

Alan Gilbert has chosen to celebrate the close of his tenure as music director of the New York Philharmonic on a political note, with a program called “A Concert for Unity.” By inviting musicians from countries including Iran and Israel to join Philharmonic members on the stage of David Geffen Hall on Thursday, Friday and Saturday, Mr. Gilbert is clearly trying to steer against the divisive winds coming out of Washington.

But he is also inserting himself into a tradition of bridge-building musical events that reach back to the aftermath of World War II. Here are five memorable moments of musical diplomacy. Full story.