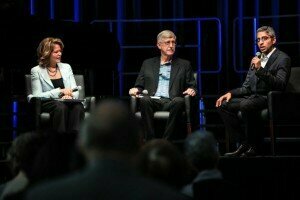 What do a Supreme Court justice, the director of the National Institutes of Health, and a four-time Grammy-winning opera singer discuss over dessert?

It was at a dinner party two years ago when that trio got together — Antonin Scalia, NIH Director Francis Collins, and Renee Fleming — and found themselves singing a rendition of “The Times They Are a-Changin.’” But the gathering, as Collins recalled before a packed concert hall Friday night, also made him and Fleming, an artistic advisor to the Kennedy Center, realize there was an opportunity to work together to explore the crossover between their two fields: science and music. Full story.