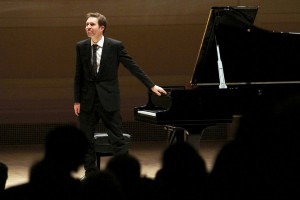 “Which master managed, as Beethoven did in his late music, to weld together present, past and future, the sublime and the profane?” Alfred Brendel wrote in his recent book for piano aficionados, “A Pianist’s A-Z” — aptly describing music whose depth prompts even the most expressive virtuosos to delay performing it, saying, “I’m not ready.”

The Norwegian pianist Leif Ove Andsnes, 44, was for years among the hesitant, waiting until his 40s to begin recording a superb interpretation of the Beethoven concertos with the Mahler Chamber Orchestra on Sony Classical. He will perform the five concertos in two concerts at Carnegie Hall in February.

“Beethoven is not only about suffering — it’s about many emotions, true happiness and ecstasy,” Mr. Andsnes said in a phone interview. “It’s not true that someone has to have been through extreme emotions to play the music, but you have to be able to sympathize and have empathy with the emotions. If I play a piece of Chopin or Schumann, it’s a one-to-one confession all the time, but with Beethoven, the slow movements are not so much a confession but more a kind of preaching. He has a bigger message about humanity. Earlier, I didn’t really understand and appreciate that expression.”

In recent phone and email interviews, several musicians talked about the pieces they find challenging to play. The pianist Jeremy Denk seeks “a feeling of wonder” when assessing his readiness to perform a work. He hasn’t yet played Beethoven’s “Diabelli Variations” in public, he said, because he has “no wonderment, just befuddlement.”

For the pianist Marc-André Hamelin, who built up his career with technically challenging obscurities, readiness can be defined as a “state in which I feel that I can be trusted in the way that I channel the emotional content of a piece,” he said.

The responsibility of conveying emotional content like the solitude and sadness of late Schubert is one aspect that renders musicians apprehensive, along with the weight of audience expectations and the potential comparison to legendary recordings. Musicians often state that they should wait until they “have something to say” before tackling pieces like Bach’s “Goldberg Variations” or late Beethoven or Schubert, although for the pianist Richard Goode the phrase “having something to say” suggests “an act of will — something extrinsic to a genuine involvement,” he said. “If you are deeply engaged with a work and try to be faithful to it, then, with luck, the music will speak.”

According to Mr. Denk, “In a case like Schubert, who died at 31, he had enough sorrow for a lifetime. There is something about the subtext of his music — people say you have to suffer a little more.” He recalled that when he attended Marlboro (the prestigious chamber music festival in Vermont now run by the veteran pianist Mitsuko Uchida), “there was a feeling that there were the seniors in the back row and they were grousing about how superficially the kids were playing the pieces — a get-off-my-lawn kind of attitude.”

Some student musicians indeed feel they haven’t the requisite life experience to convey such deep emotions through music, said the cellist Paul Katz, a member of the (now disbanded) Cleveland Quartet; he tries to dispel the notion during coaching. In its early days, he said, the Cleveland ensemble was criticized for tackling repertoire that some critics felt the group was too inexperienced to perform.

“We have a responsibility to probe, but at the same time it’s amazing how many young people are throttled and intimidated by that,” he said. “It’s something I never felt myself. I was able to feel the greatness and sense of responsibility but not feel bottled up by it.”

“No mortal ever feels totally ready” for Beethoven’s late string quartets, he added. “Those works humble us. We grow into them.”

Some of his students, he said, aware of the tremendous suffering of composers like Beethoven and Schubert, feel that their own lives have been too comfortable to empathize with such despair: “There is something to suffering pain and depression — that somehow does deepen a musician. But most teenagers have experienced that for one reason or another.”

While some musicians feel more comfortable waiting before publicly performing certain repertoire, others feel no such qualms. Shortly after recording the complete Beethoven sonatas at 24 in 2012, the pianist HJ Lim said in an interview, “I don’t take life for granted, and I don’t know if I will be alive in five years. As far as I know, no composer wrote on their score, ‘Forbidden to those under age 18.’ ”

For the pianist Jonathan Biss, 34, who teaches an online course about Beethoven and is midway through recording the complete 32 sonatas, “On the one hand, Beethoven is unspeakably profound,” he said. “On the other hand, there is not much gained about being too precious about it. The fact I decided to record the Beethoven sonatas doesn’t mean I won’t feel differently about them in 20 years. I knew I would go deeper if I was forced to record them.”

“I love Chopin’s music, and it’s really difficult to play well,” he added, “but if I look at the Polonaise-Fantaisie, my relationship to it hasn’t changed much since I first played it at 19. But Beethoven’s Opus 109 takes on a new shape. There is something about the music which is philosophical — you go through more of a process with it.”

The violinist Gershon Gerchikov, 30, a member of the Ariel Quartet, which will perform the Beethoven cycle at SubCulture in Manhattan beginning on Jan. 17, recalled a senior violinist once informing the group that it should stay away from Beethoven and stick to “easy little pieces” by Mozart and Haydn; strange advice, he noted, given the supreme challenge of performing them well.

He and his colleagues appreciated how Mr. Katz, then their coach, encouraged them to tackle pinnacles of the repertory even while very young. These works require “a lot of experience and maturity,” Mr. Gerchikov said. “But the only way to acquire the maturity and experience is by playing them.”

The violist Jonah Sirota of the Chiara String Quartet, which recently released the complete Brahms quartets, noted that “icons of the standard repertory bring baggage.”

“These are pieces with iconic recordings,” he said. “It’s great that people have strong ideas about what it should sound like, but it’s also to the detriment of the music and the furthering of the art in a sense. Every generation needs to put their own stamp on the music.”

Mr. Hamelin recalled canceling a live radio broadcast of the Liszt B Minor Sonata because of the “crushing weight of possible scrutinizing comparisons,” a pressure he now navigates by approaching a work as if no one in the audience has ever heard it — even when working on something as familiar as Beethoven’s “Moonlight” Sonata.

The reverence toward the Germanic composers (who certainly don’t have a monopoly on profundity) means that adequate attention is sometimes not paid to respecting the structural detail and depth of myriad other composers.

“I think Chopin is the most difficult of the great composers to play, and you can easily destroy the transparency on a modern piano,” Mr. Andsnes said. “Chopin’s music cannot take a rough approach, while Beethoven’s actually can. You can hear a performance of the ‘Appassionata’ or ‘Moonlight’ that is not great but still hear that it’s great music. But if you hear Chopin’s Third Ballade played in a rough way, you maybe don’t think it’s such great music.”

Some of Bach’s music is a prime example of how even works of genius can be destroyed in the wrong hands. The Cello Suites were deemed quotidian exercises until Pablo Casals revealed their beauty. (He began studying them at 13, first performed them publicly 13 years after that, then waited until 60 to record them.) Bach’s “Goldberg Variations” occupied a similarly dusty corner of the repertory before Glenn Gould worked his magic on them and released a benchmark recording.

Even if a musician feels “ready” to publicly perform a particular work, the player’s life experience, musical maturity, empathy and technique are still no guarantees of a truly communicative performance. Other musicians may have the innate, unteachable ability to elevate a performance from merely pleasing to sublime but lack confidence.

“Musicians have anxiety about everything,” Mr. Biss said. “A solution to my anxieties is that you step into the void. Just try. On the one hand, you’re dealing with truly great works of art, but at the same time you’re not a doctor — if you make a mistake, nobody will die.”

For some musicians, waiting pays off. Yuja Wang, 27, said in a 2012 interview that the Germanic repertory “needs much more maturity and growing” and that “if I don’t bring something meaningful to it, then I might as well not play it at all.” Ms. Wang recently offered a masterly, soulful performance of Schubert’s Piano Sonata in A at Carnegie Hall.

Nonetheless, any fans of Mr. Andsnes hoping he will record the Beethoven sonatas will have to wait. “Most of them are masterpieces, and it’s just quite overwhelming,” he said. “At some point in the future, I will record some of them. But for now, I’m not ready.”