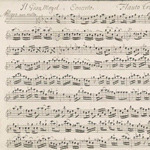 Found among Marquess of Lothian family papers, score part of lost quartet and may not have been heard in 250 years.


A lost Vivaldi flute concerto is to be heard in full for the first time in 250 years after being rediscovered in the family archives of a Scottish nobleman who was killed at the battle of Culloden.

Andrew Woolley, a musicologist, stumbled upon the find of his career when he saw a reference to an unspecified Vivaldi score among papers belonging to the Marquesses of Lothian in the National Archives of Scotland in Edinburgh. The composition had lain unremarked for 20 years.

An expert in Vivaldi, Woolley examined the score, entitled Il Gran Mogol, and realised he had come across something comparable to the 2005 discovery of the Baroque composer’s Dixit Dominus, a sacred work for vocalists and orchestra that was unearthed in Dresden, Germany.

After several months of detective work, Woolley, a research fellow at the University of Southampton, believes the Il Gran Mogol score was collected in the 1730s by Lord Robert Kerr, the son of the third Marquis of Lothian, during a “grand tour” of continental Europe. On that tour, Kerr, a flautist, is also believed to have acquired three pieces found in the same folder as the concerto.

He died at Culloden in 1746 fighting for government forces against the Jacobites. His whereabouts between 1732 and 1739, when he was commissioned in the army, are not recorded.

Woolley said it was highly likely Kerr went on a cultural tour of Europe, taking in places such as Italy, Germany, France and the Low Countries. “That would have given him the opportunity, like many British gentlemen of the 18th century, to acquire souvenirs of the trip such as the manuscript of a wonderful flute concerto by Vivaldi,” he said.

Il Gran Mogol is believed to have been written by the Italian composer in the late 1720s or early 1730s as part of a quartet of short “national” concertos during his later period. Woolley had to reconstruct a missing part for the second violin from a similar Vivaldi work kept in Turin. “The new concerto is a delightful piece with an exquisite central slow movement,” he said.

The concerto referred to India, or the Mogul empire, and was written as part of quartet some scholars suggest was the geographical equivalent to Vivaldi’s The Four Seasons. The other three pieces, La Francia, La Spagna and L’Inghilterro, remain lost.

Il Gran Mogol, which lasts around six to seven minutes, will be played in full by the early music ensemble La Serenissima in Perth in January. There will be further performances in Bury St Edmonds and London, and then at the Stour festival in June.

The last recorded evidence of the concerto comes from the sale catalogue of a Dutch bookseller in 1759, 13 years after Kerr’s death. That suggests other copies of the piece existed. “The fact it survives in parts suggests that it was performed,” Woolley said. There is no record of where and when it was played.

George MacKenzie, the keeper of the records of Scotland, said: “This is a rather unusual document. It has been in our possession for quite some time; it has even been in our catalogue, but we didn’t realise it’s significance until Andrew Woolley came across it and proved its provenance.”