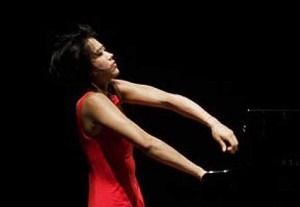 Pianist Yuja Wang turned the heads of fans and critics alike when she performed at the Hollywood Bowl recently in a short, tight dress. Did it affect the performance? Researchers say visual clues can influence what you hear.
(Xavier Antoinet/YujaWang.com)

When it comes to classical pianists like Yuja Wang, what you see influences what you hear.

When young pianist Yuja Wang performed at the Hollywood Bowl in early August, the chatter was not about her virtuosity, but rather her short, tight dress. Washington Post music critic Anne Midgette addressed the controversy, writing: “Should we comment on how classical stars look? On the one hand, appearance has no bearing on how an artist sounds.”

Stop right there. In fact, visual cues we pick up from watching musicians in action significantly influence our judgment of their playing, according to newly published research.

German researchers Klaus-Ernst Behne and Clemens Wöllner present evidence that a pianist’s body language impacts how even knowledgeable listeners evaluate his or her performance. While they don’t address the issue of attire, their research provides a clue as to why women artists are sometimes judged differently than men.

Writing in the journal Musicae Scientiae, Behne and Wöllner describe their successful attempt to replicate a fascinating 1990 study, which was originally published in German. As part of a 2009 music psychology seminar at a major music academy, they gathered 35 students — all accomplished musicians — for a study of the visual impact of piano performances.

The participants viewed videos featuring four student musicians at the keyboard. Specifically, they watched two renditions of Chopin’s Waltz in A-Flat Major, and two performances of a capriccio by Brahms.

Unbeknownst to them, the soundtracks for the videos were recorded by the same pianist. He was seen in one of the four videos; for the other three, the on-screen performer was actually a body double.

For both the Chopin and Brahms works, one of the “performers” was male, the other female. After watching both renditions, participants rated what they heard using five-point scales to judge the players on such elements as confidence, precision, drama, virtuosity and expressivity.

Despite the fact the soundtracks were identical, “Nearly all participants identified differences between the pairs of video recordings,” the researchers report. Duplicating the results of the 1990 study, the “performances” by the male pianists were perceived as more precise, while the female pianist’s “performance” of Chopin was judged as more dramatic.

How could people with finely honed listening skills be fooled into thinking they were hearing different interpretations?

“Differences between male and female performers’ bodily communication were frequently reported [by the participants during debriefing sessions],” the researchers write. “Female performers were described as using their bodies more expressively than male performers.”

This image of physical freedom and expressivity translated into “hearing” more dynamic performances from the women. In contrast, the men’s physical restraint apparently led listeners to believe their performances were more technically exact.

“When individuals are presented with multimodal sensory information, one stream of information can overtake another, giving rise to perceptual illusion,” the researchers write. Since “music is most often the outcome of human movement,” it’s unsurprising that our observations of such movements help us make sense of what we’re hearing.

So the classical music establishment acted wisely when, in the 1960s, orchestras began holding blind auditions, with candidates playing behind a screen. But audiences and critics watch as well as listen to performances. Perhaps more problematically, so do judges of piano competitions, at least in the final rounds. This research suggests their reactions may depend in part on the competitors’ physicality.

Perhaps it’s not a coincidence that the famously stoic violinist Jascha Heifetz, who was known “neither to move nor even to flinch during a performance,” became a superstar during the era when recordings were first mass produced. Would he be as successful in this visual age, when concerts by the Los Angeles Philharmonic and its dynamic music director, Gustavo Dudamel, are beamed live into movie theaters?

On the big screen, we have been primed to expect action — and, come to think of it, sex appeal. Wang’s fashion sense, however disconcerting it is to some, may be very savvy. But this research suggests her reputation for exciting performances isn’t impacted so much by her body as it is by her body language.