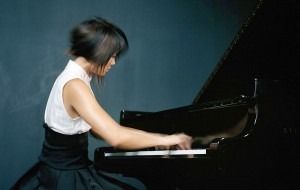 In the last decade or so the growth of technical proficiency among young pianists has seemed exponential. The new generation that can play anything includes Yuja Wang.
Photo: Felix Broede/Deutsche Grammophon

THE latest young pianist from China to excite classical music audiences and earn raves from critics is the 24-year-old Yuja Wang, a distinctive artist with a comprehensive technique. That Ms. Wang is already a musician of consequence was made clear this year when Deutsche Grammophon released her first recording with an orchestra: performances of Rachmaninoff’s Rhapsody on a Theme of Paganini and Second Piano Concerto with the Mahler Chamber Orchestra. The conductor is Claudio Abbado, no less, a towering maestro who is extremely discriminating in his choice of collaborators.

Ms. Wang’s virtuosity is stunning. But is that so unusual these days? Not really. That a young pianist has come along who can seemingly play anything, and easily, is not the big deal it would have been a short time ago.

The overall level of technical proficiency in instrumental playing, especially on the piano, has increased steadily over time. Many piano teachers, critics and commentators have noted the phenomenon, which is not unlike what happens in sports. The four-minute mile seemed an impossibility until Roger Bannister made the breakthrough in 1954. Since then, runners have knocked nearly 17 seconds off Bannister’s time.

Something similar has long been occurring with pianists. And in the last decade or so the growth of technical proficiency has seemed exponential. Yes, Ms. Wang, who will make her New York recital debut at Carnegie Hall in October, can play anything. But in China alone, in recent years, there have been Lang Lang and Yundi Li.

Russia has given us Kirill Gerstein, born in 1979, the latest recipient of the distinguished Gilmore Artist Award, whose extraordinary recording of the Liszt Sonata, Schumann’s mercurial “Humoreske” and a fanciful piece by Oliver Knussen on Myrios Classics was one of the best recordings of 2010. In June Mr. Gerstein made his New York Philharmonic debut at a Summertime Classics concert with a boldly interpreted and brilliant account of Tchaikovsky’s First Piano Concerto. But don’t let his probing musicianship distract you. He is another of those younger technicians who have figured out everything about piano playing.

A couple of weeks ago, during the International Keyboard Institute and Festival at Mannes College the New School for Music in New York, the 20-year-old Daniil Trifonov, fresh from his victory at the International Tchaikovsky Competition in Moscow, showed astonishing skills in works by Scriabin, Chopin and Liszt. He has a poetic side that needs developing. Still, this young man is a formidable virtuoso.

What long-term effect this trend will have on the field is not clear. Classical music is facing its share of challenges, including declining appreciation of the art form among the general public, and not all segments of the audience are noticing the breakthrough in technical accomplishment that is apparent to insiders: pianists, concert presenters and pianophiles. Because so many pianists are so good, many concertgoers have simply come to expect that any soloist playing the Tchaikovsky First Concerto with the New York Philharmonic will be a phenomenal technician.

A new level of technical excellence is expected of emerging pianists. I see it not just on the concert circuit but also at conservatories and colleges. In recent years, at recitals and chamber music programs at the Juilliard School and elsewhere, particularly with contemporary-music ensembles, I have repeatedly been struck by the sheer level of instrumental expertise that seems a given.

The pianist Jerome Lowenthal, a longtime faculty member at Juilliard, said in a recent telephone interview from California that a phenomenon is absolutely taking place. He observes it in his own studio.

When the 1996 movie “Shine,” about the mentally ill pianist David Helfgott, raised curiosity about Rachmaninoff’s Third Piano Concerto, Mr. Lowenthal was asked by reporters whether this piece was as formidably difficult as the movie had suggested. He said that he had two answers: “One was that this piece truly is terribly hard. Two was that all my 16-year-old students were playing it.”

Some months ago I was speaking about the issue with the pianist Gilbert Kalish, who teaches at Stony Brook University on Long Island. He said that when Gyorgy Ligeti’s études, which explore new realms of texture, sound and technique at the piano, gained attention in the 1990s, they were considered nearly impossible. Only experts like the French pianist Pierre-Laurent Aimard could play them, it was thought. But now, thanks to greater familiarity, Mr. Kalish said, “my students at Stony Brook play them quite comfortably.”

Expanding on this subject in a recent e-mail Mr. Kalish wrote that composers always push at the boundaries: “Someone creates a work of extraordinary difficulty that seems unplayable and then, simply because it exists (and is excellent), people rise to the occasion, and we find that it was indeed possible.”

This seems a crucial point. A reason that pianists are getting technically stronger is that as in sports, teachers and students are just learning to practice the craft better, becoming better conditioned and getting better results. But as Mr. Kalish suggests, another reason is that pianists are rising to the challenges of new music that pushes boundaries.

This phenomenon should be seen in historical context. The first several decades of the 20th century are considered a golden era by many piano buffs, a time when artistic imagination and musical richness were valued more than technical perfection. There were certainly pianists during that period who had exquisite, impressive technique, like Josef Lhevinne and Rachmaninoff himself. And white-hot virtuosos like the young Vladimir Horowitz wowed the public.

But audiences and critics tolerated a lot of playing that would be considered sloppy today. Listen to 1920s and ’30s recordings of the pianist Alfred Cortot, immensely respected in his day. He would probably not be admitted to Juilliard now. Despite the refinement and élan in his playing, his recording of Chopin’s 24 études from the early 1930s is, by today’s standards, littered with clinkers.

These days playing the Chopin études with comfort is practically an entry-level requirement for membership in the ranks of professional pianists. As if to announce himself from the outset, the brilliant Russian pianist Nikolai Lugansky recorded the complete Chopin études, dazzlingly, for his second album on Erato, released in 2000.

It is fascinating to compare Mr. Lugansky’s performance of Chopin’s First Étude with Cortot’s. (Both are available on YouTube.) The piece is a study in right-hand arpeggios, which race up and down the keyboard as the left hand adds a grounding bass line in octaves. Cortot’s performance has sweep and vitality but is full of fudged, careless passages. Mr. Lugansky’s account is not just note perfect and incisive but also colorful and exciting.

There is a danger in pursuing perfection. After Van Cliburn won the 1958 Tchaikovsky Competition and became a household name, every young pianist saw competitions as the route to fame and success. A new generation worked tirelessly to achieve technical flawlessness. Critics found that many of these young pianists had “competition chops” but not much else to offer.

But more recently younger pianists have not been cookie-cutter virtuosos. Technical excellence is such a given that these artists can cultivate real personality, style and flair: artists like the Ukrainian pianist Alexander Romanovsky, whose 2009 recording of Rachmaninoff’s “Études-Tableaux” for Decca is wondrously beautiful, or the highly imaginative Polish-Hungarian pianist Piotr Anderszewski, an exceptional Bach interpreter.

During every era of the piano there were players who were superb artists with more on their minds than dazzling virtuosity. You might divide pianists into two basic groups: those who have the technique to play anything and those who have all the technique they need, thank you, to play the music that is meaningful to them.

A good example of a pianist with all the technique he needed was Rudolf Serkin, a hero to me as a piano student. Serkin had a thorough technique. But nothing came easily to him, as he said in many interviews. You could argue that playing the daunting Brahms concertos and Beethoven’s “Hammerklavier” Sonata with the authority and excitement that Serkin brought to them was harder in a way than dashing off Prokofiev’s finger-twisting Third Piano Concerto or the mighty Liszt Sonata, pieces he did not perform.

I would place essential artists today like Richard Goode, Mitsuko Uchida and Andras Schiff among the group with all the technique they need. Among younger pianists, this club would include Jonathan Biss, a sensitive, musically scrupulous player; and one of my new favorites, the young Israeli David Greilsammer, who played an inspiring program at the Walter Reade Theater last year in which he made connections among composers from Monteverdi to John Adams, with stops at Rameau, Janacek, Ligeti and more. He may not be a supervirtuoso. But I find his elegant artistry and pianism more gratifying than the hyperexpressive virtuosity of Lang Lang, whose astonishing technique I certainly salute.

Besides, the group of play-anything pianists, of which Mr. Lang is a leader, is getting pretty big. Among them you would have to include Garrick Ohlsson, who not only plays with resourceful mastery but seems to play everything, including all the works of Chopin. I would include Leif Ove Andsnes, an artist I revere, who does not call attention to himself but plays with exquisite technique and vibrant musicality.

This list goes on. Martha Argerich can be a wild woman at the piano, but who cares? She has stupefying technique and arresting musical ideas. I would add Krystian Zimerman, Marc-André Hamelin and probably Jean-Yves Thibaudet to this roster. There are others, both older and younger pianists. Again, lovers of the piano can disagree about the musical approaches of these tremendous artists. But that they are all active right now suggests that a new level of conquering the piano has been reached.

You could argue that younger performers are expanding the boundaries of technique in other instruments as well, especially the violin and the cello. But singers are the exception to this trend. One obvious reason is that while the instruments themselves have not changed that much in the last century, every voice is unique to a person and a body. Though there are certain time-tested principles, each singer must come to terms with his or her own voice.

With pianists getting better and better, so many are so good that, paradoxically, I am less impressed by virtuosity. Last season Evgeny Kissin, one of the most uncannily accomplished pianists of modern times, played a remarkable Liszt recital at Carnegie Hall. After Mr. Kissin’s Liszt Sonata a piano enthusiast sitting near me asked, “Have you ever heard the piece played so magnificently?”

I said that the performance was indeed amazing, but that actually, yes, I had heard a comparably magnificent performance on the same stage a few months earlier during a recital by Stephen Hough. Mr. Hough’s playing was just as prodigious technically, and I found his conception more engrossing. He reconciled the episodic sections of this teeming work into an awesome entity.

Mr. Hough is another pianist who can play anything. Join the club.