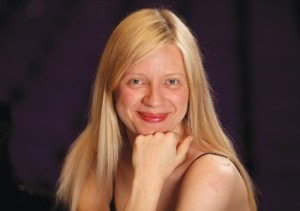 For the record: Valentina Lisitsa is releasing a Liszt album on vinyl (Credit: Jon Crwys-Williams)

There is a truth, universally held among classical musicians, that old recordings are better than new. absurdity of this proposition is obvious. It is the same as arguing that athletes and equipment in the 1948 London Olympics were superior to those of 2012. But where sport can prick pretension with statistics, music is a matter of faith — and faith, as Richard Dawkins refuses to accept, flourishes where reason ends.

In music, the flat-earthers are winning the argument. Listen carefully, the grinding noise you hear behind this column is the sound of the musical clock being turned back. Here’s the latest news: the classical LP has resumed production.

Two influential conductors, Paavo Järvi and Gustavo Dudamel, have just made vinyl-only releases. The pianist Valentina Lisitsa— YouTube’s most-watched classical artist — has a Liszt album coming out in analogue. A New York string quartet, Brooklyn Rider, issued their debut album on LP because, they say, “Vinyl creates a bridge to a past we deeply admire.” Amazon has opened a Vinyl Store. And the fastest-growing area of US music sales, up 39.3 per cent, is, you guessed, the notoriously scratchy, inaccurate, superannuated, inconvenient, short-lasting, long-playing 33 rpm record.

After a quarter of a century of obsolescence, the LP is making a comeback worthy of any religious resurrection. How it has risen from charity shop basement to wealthy living room is a parable for our times, a classic example of popular resistance to the overwhelming weight of scientific evidence and market forces. This is a turnaround equivalent to the vindication of homeopathy, the revival of newsprint and the return of the French monarchy, a romantic defiance of intellect and reality.

The Old Believers give two reasons for revering LPs. The first, misty-eyed, proclaims that there were giants in past times who were closer than we are to the source of creation and thus greater than we can ever hope to be. There is no comeback to this claim. I have tried in vain to demonstrate how Riccardo Chailly’s 2011 Decca set of the Beethoven symphonies is better played, in immaculate sound and with a clearer concept of structure than Toscanini’s boxy platters on RCA Red Seal, but the OBs just plug their ears and go la-la-la.

The second credo, more mystical still, maintains that recording sound on to a physical surface is a healthy, organic process, whereas its reduction to binary digits somehow deprives the music of its “humanity”. Harking back to my first dose of digital 30 years ago at Decca’s West Hampstead studios, I can summon a grain of sympathy for that position. Early digital was not easy on the ears. The technology was so clinical that microphone placement needed to be frugal and precise. It rarely was. I recall the noise of a carpentry workshop in a digital Tchaikovsky overture. Upon investigation it turned out to be one mike too close to the cello bridges, ruining a good record.

Ten years after those first demonstrations, I watched Nigel Kennedy record the Beethoven concerto in a small town in Germany with an EMI team who were so scornful of his Luddite adherence to analogue tape that they set up a parallel digital feed and challenged me blindfold to tell them apart. I couldn’t. Such was the advance of digital ingenuity that the boffins had managed to produce a sound that had the presence (or warmth) of analogue without the disfiguring snap, crackle and pop that condemned the late LP to the knacker’s yard.

Today, a teenager with a kit from Amazon can record an orchestral image cleaner than the most sterile dreams of Herbert von Karajan, a maestro who embraced digital (“all else is gaslight,” he declared) in his quest for an inhuman degree of sound purity. Karajan, paradoxically, is adored by self-styled audiophiles who crave the “human” sound of needle on surface. Go figure. There is no arguing with Old Believers. “Do I contradict myself?” sang Walt Whitman. “Very well then, I contradict myself.”

It is into this logical vacuum that the LP has made its improbable return. Here’s why. Music in 2012 is increasingly received by download. Soon, we are told, the physical object will become unnecessary. Many of us already carry what we call “my music” on portable telephones and personal devices. “She shall have music wherever she goes” — the old nursery rhyme was prophetic.

But technology has not kept pace with portability. The sound on iTunes Plus, Apple’s premium service, is compressed to 256 kilobits per second (kbps), inadequate for complex, subtle, classical music. On specialist download sites it rises to 320kbps. That is still inferior to CD sound. So disgruntlement grows with download culture.

The formidable Lisitsa, faster with a soundbite than Obama at an oil slick, declares: “Digital did to music what Photoshop did to photography.” She has a point, but you see where this is leading: to a perception that new technology is the enemy of musical truth.

The danger here is that the classical community, itself a tiny fragment of the global music market, will split into camps of mutual incomprehension. The hungriest consumers for classical music are now in East Asia, chiefly Korea and China, where most purchases are by download. While a growing minority of Westerners wistfully embrace the dead LP, Asian ears are being iTuned to an opacity of sound that music professionals consider meagre, offensive and unacceptable.

At this point, the vinyl revival ceases to be a trivial matter. It amounts to a Tower of Babel moment when one half of the world can no longer understand the other and music cannot bridge the gap. It is all very well for aesthetes with high-end music systems to welcome the return of flat-pack LPs, but their satisfaction distracts from the chief priority.

The winner of the 2012 orchestral Grammy was a download-only Los Angeles concert of Brahms’s Fourth. It sounded terrible. Unless Apple and its rivals can be pressured to produce a credible sonic image of rich orchestral sound, our ears will be progressively impoverished and the next generation will be raised in ignorance of what real music might be. At that point, even a rational column like this might revert to 33 revolutions per minute.