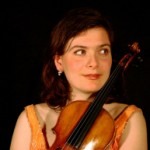 The Vienna Philharmonic, one of the oldest and most venerated orchestras in the world, has permanently appointed its first woman concertmaster.

The world famous ensemble announced Saturday that she now has the concertmaster position after passing probation.

Established in 1842, the Vienna Philharmonic Orchestra was an all-male ensemble until the 1980s when women started joining its ranks.

However, women weren’t allowed to become full members until 1997 — which means being accepted into the association of the Vienna Philharmonic, an organization that confers certain privileges and prestige.

The concertmaster, head of the first violin section, is regarded as the second most important orchestra member after the conductor.

Unlike most orchestras, the string instruments in the Vienna Philharmonic belong to the orchestra itself.

The instruments are carefully chosen for their pedigree so the philharmonic can keep producing its distinctive string sound.