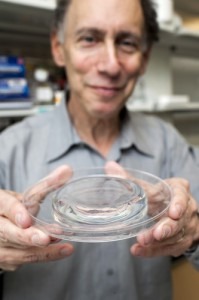 Langer, the Massachusetts Institute of Technology scientist whose work has created two dozen biotechnology startups, is developing a gel that can vibrate up to 200 times a second — replicating the action of human vocal cords — to rejuvenate the damaged voices of singers such as Daltrey and Aerosmith’s Steven Tyler, both of whom have contributed funding for the project, along with actress and singer Julie Andrews.

More than 13,000 Americans diagnosed each year with throat tumors may be helped by the efforts of the singers, the scientist and the surgeon who brought them together, Harvard University’s Steven Zeitels. Langer and Zeitels plan to test the gel in a cancer patient for the first time in 2012.

“Unless you’ve been touched personally, it’s difficult to see, but there are millions of people who have no voice whatsoever,” said Daltrey, who was operated on for precancerous throat lesions two years ago, and couldn’t speak for two weeks.

The gel is injected directly into the vocal cords. Once there, it’s designed to behave the same way as the uninjured membrane, responding to breath and muscle tension by vibrating as if it was the real thing, Zeitels said. The research has also been funded by the nonprofit Institute of Laryngology and Voice Restoration, where Andrews is an honorary chairwoman.

The research, which began in the 1990s, was accelerated after Zeitels, 53, a professor of laryngeal surgery at Harvard Medical School in Boston, took over treatment of Andrews, the 76-year-old star of “The Sound of Music,” after she underwent surgery in 1997 to remove nodules on her vocal cords.

That operation, by another surgeon, left her unable to sing, said Zeitels, who is also a surgeon at Massachusetts General Hospital, in a telephone interview.

Daltrey, 67, and Tyler, 63, were also Zeitels’ patients and have supported his research into how best to repair damaged throat tissue, the doctor said in a telephone interview. After seeking advice from a number of scientific experts, he was directed to Langer’s MIT laboratory in Cambridge, Massachusetts.

No matter who Zeitels spoke to about the challenges inherent in the work, he got the same answer, he said: “If you’re going to get this achieved, Bob Langer is the person to go to.”

A chemical engineer by training, Langer, 63, is best known for his 1976 discovery of factors in cartilage that limit blood vessel growth, and for creating new ways to deliver them slowly over time. That work led directly to anti-cancer drugs that work by starving tumors of their blood supply, including Roche Holding AG (ROG)’s Avastin. It also was key in helping to create the time-release drug business.

In the 1980s, Langer helped created an implantable wafer to deliver chemotherapy to the brain after tumors had been removed, the first therapy in more than 20 years to extend the lives of patients with brain cancer.

He created the first biodegradable scaffolding for living cells in the 1990s, an achievement that drew a strong public response after a University of Massachusetts anesthesiologist, Charles Vacanti, expanded Langer’s research by growing a human ear on a mouse’s back. That work also allowed scientists to begin rebuilding skin, cartilage, and bone in ways now used to help cancer victims and damaged athletes.

Langer has published about 1,300 scientific papers and won pretty much every award in his scientific field, shy of the Nobel Prize, though that isn’t why he’s a scientist, he said.

“The question for me has always been ‘How can you get the stuff you’re doing to affect more people,’” Langer said in an interview at his MIT offices. “A big idea is something that’s disruptive, that might create a shift in the field.”

Recreating vibrating vocal cords represents a unique challenge, Langer said. The material needs to bond with the existing cords, overcome scarring and be long-lasting. It also must have the right elasticity to respond properly to muscle contractions and the movement of air as a vocal cord would.

The gel developed by Langer is a type of polyethylene glycol, a material approved for other medical uses and in some skin creams. To use it, Langer’s lab had to rearrange the molecules to allow it to vibrate at the correct speed.

“With synthetic materials, the beauty is you can tailor them and build in the degradation rate or mechanical strength you need because you’re making them from scratch,” Langer said.

While there’s no way to tell yet if use of the new material will allow singers to regain their youthful tones, tests in animals suggest it may help people who have lost their voices speak again. Safety tests are continuing, and Zeitels said he has discussed with U.S. regulators what results will be needed to advance the work into a human trial next year. Brazil’s former president Luiz Inacio Lula da Silva announced Oct. 29 that doctors had found a tumor in his throat that needs treatment though he hasn’t had to undergo surgery that would risk his ability to speak.

For Langer, the scope of the vocal cord project mirrors what he’s been doing for years. Applied science projects like the oscillating gel interest Langer the most and have led to creation of a number of startups, he said.

Langer said when he was younger, “I was publishing the papers but it wasn’t changing the world.” The question he began to pose as he got older, he said, “was how to get the stuff you’re doing to affect more people.”

Since 1988, Langer has preferred to do that working with small companies. That’s when he founded his first startup, Enzytech, which was later acquired by Alkermes Inc. (ALKS)

Often working with Polaris Venture Partners, based in Seattle and Boston, he has founded 23 companies since then, he said, including Bind Biosciences, Advanced Inhalation Research and Living Proof, three closely held companies located in Cambridge, Massachusetts, and Acusphere Inc. (ACUS), based in Watertown, Massachusetts. Alkermes Inc. also acquired Advanced Inhalation Research in 1999.

“He’s an incredibly prolific guy,” said Polaris co- founder Terry McGuire, a frequent investor in Langer’s companies. “If you look at what he does in the lab, it’s crazy to put that into one company.”

Langer “doesn’t waste time on mundane, incremental research,” said H. Kent Bowen, a professor of business administration at the Harvard University Business School in Boston, who wrote a case study on Langer’s lab in 2005. “His philosophy is: ‘It may not work out, but if it does, it’ll be great. It’ll be huge!’”

For The Who’s Daltrey, similar success on the vocal cord gel can’t come soon enough. The loss of voice he suffered after surgery was “psychologically challenging,” he said. While he’s regained his voice he remains fascinated by the idea that Langer’s gel could help others from his generation.

The gel is injected into the vocal folds. Once there, it behaves in the same way as a native vocal cord, responding to muscles tensing and vibrating at the same rate as the uninjured membrane in response to breath, Zeitels said.

“It’s not just for singers, although it’s one of Steven’s main ambitions to get this perfected in time to give Julie Andrews her proper voice back,” Daltrey said.“ That’s how good he thinks it is.”