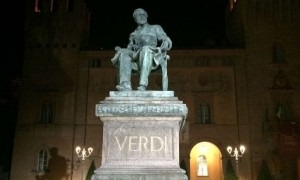 I am in this wonderful city that celebrates Giuseppe Verdi for a month each October with a festival of his works, but my mind is also on Gioachino Rossini, whose works L’Italiana in Algeri and Guillaume Tell are in repertory right now at the Metropolitan Opera. On Oct. 29, it will be possible to enjoy a musical marathon at the Met as both works will be performed that day. I will be there.

I have said before in this space that I think Rossini (1792-1868) is the most undervalued of all opera composers. There are a few reasons for this. One is that he was famous for the facility with which he wrote music and it came to be assumed that his works could not have been very good if he could “dash them off.” Also, because he wrote several brilliant comic operas, these were considered inferior to “high” art. And his genial style and wit meant that he was not taken seriously by some critics and opinion leaders. He was supportive of Wagner when that composer faced harsh criticism in Paris but, in return, the German composer thought of Rossini as a lightweight. Full story.