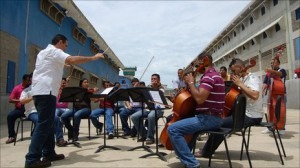 The strains of classical music drift on the breeze across the vast concrete yard at Coro prison in western Venezuela.

Surrounded on four sides by high walls or fences, looked over by a watch tower and countless closed-circuit cameras, the inner courtyard at this mixed prison is a barren and unwelcoming place.

But the music is a clue that not all is so bleak at this jail.

In the auditorium, more than 300 prisoners are preparing to show off their musical skills.

Around half are learning to play an instrument – violin, tuba, double bass or saxophone – while the others have been training their voices during choir practice.

The orchestra and choir are by far the most popular daily activities on offer to these prisoners – above carpentry, metal work or sewing. More than half the inmates at Coro take part.

“To be the first violin is a very big responsibility, and if they had the confidence in me to choose me for this role, it makes me want to keep moving forward.”

The prison orchestra is a project of Venezuela’s much-admired music system.

Created 36 years ago, the programme, known as El Sistema, is famous for its pioneering work teaching children from poorer backgrounds how to play classical music and has produced the world-famous Simon Bolivar Youth Orchestra.

It was a Youth Orchestra alumnus and human rights lawyer, Lenin Mora, who came up with the scheme to expand into the country’s prisons.

“At the beginning there were some doubts because there are instruments which can be turned into weapons, for instance, the strings of a double bass or a violin can be used to hang someone,” he says.

“Thanks to the way things have worked in the prisons we have entered, that’s never happened. The inmates look after their instruments because they see it as their responsibility.”

Prisoners must demonstrate a record of good behaviour before they can join the orchestra, and music teachers insist on good hygiene and a neat appearance.

Hours are long – they are expected to attend lessons or workshops eight hours a day for five days a week.

Already working in seven prisons, the programme will be expanded to three more later this year.

Organisers hope to eventually offer music lessons in every one of the country’s 33 prisons, but conditions in some jails mean that is highly unlikely in anything but the long term.

Rioting and violence are frequent in many prisons, where overcrowding is common.

At the El Rodeo prison just outside the capital, Caracas, more than 20 people were killed when a fight broke out in June. Police attempts to search the jail for weapons and drugs led to a further three deaths and a long stand-off with inmates.

But in Coro, Venezuela’s newest prison, the orchestra has been a great success, officials and prisoners alike say.

“From being some of the worst behaved inmates, we now have people who are among the best in this community with a clean record of conduct for more than two years.”

There are signs that the benefits continue long after inmates have been released.

In Caracas, I meet 28-year-old Ramiro Rondon. A former gang member, he served more than three years in prison in Merida, where he learnt to play the clarinet.

Released a year ago, he is now training to work in repair and restoration of instruments and is still taking clarinet lessons once a week.

“My life has changed 100%,” he says. “At the beginning it was difficult, but now I’ve changed my ways, I’m working hard and trying to make the best of everything.”