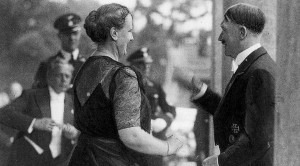 Winifred Wagner with Adolf Hitler at the 1937 Bayreuth Festival, from the book "Cosima Wagner: The Lady of Bayreuth" by Oliver Hilmes.
Credit: Yale University Press

“The Girl With the Dragon Tattoo” features the movie season’s nastiest and most disturbing family — the Vangers, a Swedish industrial dynasty whose great material wealth is matched only by its great moral corruption. In their role as the ultimate dysfunctional family, the Vangers bear an uncanny resemblance to another powerful Euro clan with dubious ethics — the Wagners of Germany.

The similarities amount to more than just a coincidence of last names. “Tattoo,” based on the bestseller by Stieg Larsson, goes to great lengths to map the gnarled roots of the Vanger family tree, which is already rotting from the inside when the story opens. Ensconced in frostbitten isolation on an island off the Swedish coast, the Vangers are a family defined primarily by infighting and estrangement. Bad blood runs ice cold; siblings and cousins are no longer on speaking terms. To complicate matters, Nazi sympathies run deep in this family, like a defective gene inherited by successive generations.

The real-life Wagners — whose most famous member was the 19th century operatic composer Richard Wagner — are no strangers to internal strife, or to Nazi sympathies for that matter. Like the Vangers in “Tattoo,” they preside over an old, musty family business — the Bayreuth Festival, an annual celebration of their uber-patriarch’s operas. In the past, the festival has been besieged by internecine power plays. The festival’s current directors — half-sisters Katharina Wagner and Eva Wagner-Pasquier — took control only after a prolonged battle involving their cousin and rival, Nike Wagner.

Nazi ties are a salient feature in Wagner family history. (Richard Wagner’s life pre-dated the rise of the Third Reich but the composer was a well-known anti-Semite.) Winifred Wagner, the English-born woman who became the composer’s daughter-in-law, was a close friend of Adolf Hitler and made the dictator welcome at the Bayreuth Festival, which she eventually directed.

In “Tattoo,” Nazism and anti-Semitism are similarly ingrained in the Vanger family history. As recounted early in Larsson’s novel, a key Vanger scion served as a member of the Swedish National Socialist Freedom League — one of the country’s first Nazi groups — and later joined up with Sven Olov Lindholm, a real-life Swedish Nazi leader. Anti-Semitism later plays an important role in the novel’s central plot, the investigation of Harriet Vanger, who has been missing for decades and is presumed dead.

Vanger/Wagner parallels don’t stop there. Larsson has populated the “Tattoo” family with Germanic names that come straight from the Wagner family tree — Gottfried, Richard and Fredrik/Friedrich can be found in both dynasties. The sexual frustration of an heir apparent is also a shared trait. Siegfried Wagner, Winifred’s husband and the composer’s eldest son, was homosexual and is believed to have engaged in a number of illicit affairs. In “Tattoo,” No. 1 son Martin Vanger carries a much more complicated sexual burden that is revealed in gradual, gruesome detail.

In both families, there is at least one upstanding member who represents moral rectitude — a white sheep, as it were, among a sea of black sheep. In “Tattoo,” it’s elderly Henrik Vanger (played in the American movie by Christopher Plummer), who frequently speaks out against his family and instigates the investigation into Harriet’s disappearance. For the Wagners, it’s Gottfried, great-grandson of the composer, who currently is alienated from the family and has openly condemned its connections to Nazism.

Did Larsson deliberately model the Vangers after the Wagners? It’s difficult to say, but the similarities are rather too abundant to be pegged to chance alone. The author, who died in 2004, was a lefty journalist whose professional obsessions included reporting on Nazism past and present. While it’s unclear whether Larsson was a classical music aficionado, it’s certainly plausible that he was familiar with the Wagner family’s dark history.

“Tattoo” leaves the impression of the Vangers as a group of monstrous gargoyles in terminal decay. As Henrik describes them in the movie, using words that many would apply to certain Wagners: They are “thieves, misers, bullies… the most detestable collection of people that you will ever meet.”