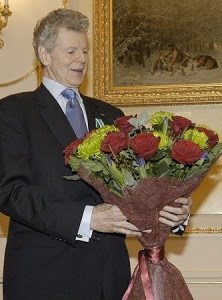 On Thursday in New York, Christie’s will auction more than 150 pieces of jewelry, silver, English and Continental furniture, and one particularly noteworthy Steinway grand piano, all of which have been owned by piano legend Van Cliburn. It was the Christie’s auction that Cliburn planned to discuss on a recent afternoon at his mansion.

But as he roamed that day from room to room — all dark wood, silver, paintings and photographs — the memories came flooding back. There were pictures of Cliburn with his beloved parents, now deceased. Cliburn with President Ronald Reagan. With opera superstar Renata Tebaldi. A portrait of his hero, Sergei Rachmaninoff. Another photograph of Cliburn in the back of an open limo, waving to the crowds during a ticker-tape parade in 1958 Manhattan.

A few weeks before, the lanky young man from Texas stunned the world by traveling to Moscow and winning the Soviet Union’s most prestigious piano competition. He had done so by playing Russia’s most beloved music. The Cold War thawed a little then. For a while, Cliburn’s fame rivaled that of another young musician, Elvis Presley.

Some of the memories he had spoken of many times before, he said that afternoon at his home. Others he had not.

Outside, after the afternoon became a breezy, brilliant spring evening, Cliburn pointed to a miniature replica of a Russia dacha, or cottage, built several years ago as a birthday present by his manager, Tommy Smith. It reminded Cliburn of the time after his triumph — what he saw when given almost free rein to visit the Russian countryside, one of the few Westerners afforded the privilege.

“They let me see all these wonderful things from the beginning,” Cliburn, now 77, said as the leaves rustled above him. “When I came back in 1960, that was such a wonderful trip. He gave me his house for the weekend on the Black Sea. He gave me a house on the Moscow River way up in the country. He was very sweet. Oh, he took me on his boat from his dacha and we motored into the middle of Moscow so we could look up at the palace of the Kremlin.”

He was Soviet leader Nikita Khrushchev, Stalin’s successor, the reigning archnemesis of the United States.

“It was just one of the most exciting things in my life,” Cliburn recalled. “He was telling me that they had watched me for two years. (I never talk about any of this.) He said: ‘You’re very wise. You don’t engage in politics.’ I said, [if I did] my grandfather would come back from the dead and kill me, because he told me: ‘Politics is a great art, but it is divisive. Great classical music is for everyone all over the world.’ [Khrushchev said] ‘Oh!’ He agreed. He said, ‘I’m proud of you because you love classical music.'”

Cliburn’s aunt was an expert on English silver, and English and Continental furniture.

“I was raised in that sort of thing, and I had my first book on English silver and all the markings when I was 8 years old,” he said.

Later, Cliburn commemorated performances around the world by buying valuable objects, silver, teapots, vases and cuff links, some of them once belonging to households of the czars. Many of those pieces, ranging in price from an estimated $1,000 to $250,000, will be part of the sale this week in New York.

“It’s really a magnificent collection of works that tells the story of his career and his travels,” said Capera Ryan, senior vice president at Christie’s. “It’s a beautiful story, the story of Van as a musician, but also as Van a historical icon.”

Another auction item will be the century-old Steinway grand piano over which Cliburn and his mother (also his first teacher), Rildia Bee, long toiled. Proceeds from the sale of the piano will be divided between the Juilliard School in New York and the Moscow Conservatory.

“Did I spend hours on that keyboard,” Cliburn said. “Now we have other pianos, and this is a good practice piano for me.” He nodded toward another grand. “But I looked at that piano. … Mother just loved it. She was just a fabulous pianist. I was mesmerized by her.”

Rildia Bee O’Bryan Cliburn had indeed been a unique musical talent in her own right. The daughter of a lawyer and former mayor of the small town of McGregor, she had gone away to study piano at the Cincinnati Conservatory, and then in New York. Her teacher there was Arthur Friedheim, who had been a pupil of piano legend Franz Liszt. That was the lineage she brought to her young son after she married oilman Harvey Lavan Cliburn.

“I was old when I was born,” Van Cliburn said. “I told my parents when I was 5, ‘I am going to be a concert pianist.’ They thought I was crazy. I played in public when I was 4, then I made my debut with the Houston Symphony when I was 12, and my debut with the New York Philharmonic, I had just turned 20. I had so much ambition, but first of all I loved the music.”

And he had a very demanding teacher.

“I was about 9 or 10 and she was taking me through the Transcendental Etudes of Liszt,” Cliburn said. “She said, ‘Oh no, dear.’ I said, ‘I can’t play this because I don’t have perfect hands like you.'”

The spirit of Russia

It had always seemed that Cliburn had a Russian soul, as if he had lived there in another life. How else to explain what happened during the first Tchaikovsky Competition for Piano and Violin in 1958, when he became a sensation? As a child he had been enthralled by a children’s book photograph of St. Basil’s Cathedral in Red Square, and when he arrived in Moscow for the competition, that was still foremost in his mind.

“On my first night there [in 1958] I said to the woman from the Ministry of Culture, if it would not be imposing, could we pass by the church?” he remembered. “I’ve told every one of their heads of state [since then] that the lighting that night was so breathtaking. Streams of light. It was so cold and so snowy. It looked like diamonds stretching toward the church. It will never be more beautiful than it was to me that night.”

Then, on stage, he seemed to channel the Russian spirit, playing the great concertos of Rachmaninoff and Tchaikovsky. The competition had been created to showcase Russian cultural superiority, so the jury felt obligated to get Khrushchev’s permission to award Cliburn first prize. That was front-page news around the world, though Cliburn himself, sequestered in Moscow, was oblivious.

“When I got the prize, I had a few rubles and I could make the call home. I was very rich,” Cliburn remembered.

He asked his mother to call a family friend and let her know of his triumph.

He met Khrushchev for the first time a few days after his victory, at a reception in the Kremlin for Queen Elizabeth of Belgium.

“My father gave me so many vitamins,” Cliburn famously replied.

“I listened to you on the radio,” Khrushchev said. “I loved the way you played the F Minor Fantasy.”

Cliburn was shocked. He asked the translator to repeat what Khrushchev had said.

“The F Minor Fantasy by Chopin is not something you sing on the street,” Cliburn remembered. Khrushchev might have been vilified in America, but Cliburn and the communist leader had discovered a common language. “He loved classical music.”

In a Time magazine article from the time, Cliburn was quoted as saying Khrushchev “was a nice man.”

“He was nice to me,” Cliburn said on that recent day. “He was on his social behavior. I was on my social behavior. But back here. … I didn’t realize it, but the FBI was investigating me. So now, my grandfather was the campaign manager for [former House Speaker] Sam Rayburn’s first election. One day my mother gets a call. ‘Rildia Bee, this is Sam Rayburn. Now listen. I want to tell you. I just heard about Van and I called J. Edgar Hoover and told him that he’s no more of a communist than I am. I’ve known him since before he was born.’ Oh, it was so cute.”

For the next half-century, Cliburn’s life and career would intersect with the great political leaders and personalities of the 20th century. In 1987, in just one example, he played for Reagan and Soviet leader Mikhail Gorbachev at the White House.

On that recent day at home, he remembered a slightly less formal occasion, a recital in Kansas City attended by former President Harry S. Truman and his wife.

“I got this word from the presenter: ‘Mr. Truman wants to see you at intermission,'” Cliburn recalled. “Well, intermission was my favorite part of the program. I get so nervous. So, ‘Oh hello, Mr. President. I’m so thrilled to see you.’ [Truman said] ‘I’m so glad you are playing the Chopin sonata.’

“Mr. Truman really played the piano. I should have known better, but I said, ‘Mr. President, it’s not the famous Funeral Sonata.’ He said: ‘I know exactly what it is. It’s the Opus 58 in B minor. I know that well. I had such a terrible time with the development section of the first movement.’

“I almost fainted and called the doctor and said, ‘Put me in the hospital,'” Cliburn remembered. “I had to walk out on the stage after intermission. He and Mrs. Truman sitting there. ‘Oh, my God, he knows everything.’ I was a nervous wreck.”

The memories came one after another as the sun began to set. Cliburn stood near his miniature dacha and remembered 1960, when an American U-2 spy plane was shot down over the Soviet Union.

“When the U-2 incident happened, I was scheduled for three months of concerts [in the Soviet Union]. I said, ‘Well, I’m not going,'” Cliburn recalled. “I got a call from the State Department and they said, ‘Well, we canceled everybody, but Mr. Khrushchev told us he wants you to continue.’ I did my whole schedule and if I had not known about the U-2 when I got there, I never heard it mentioned.”

“Did I really live through that?” he said. “I’m very grateful for all the many things that have come my way.”