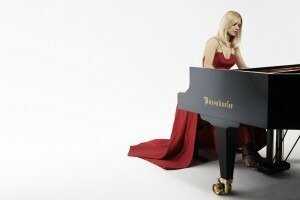 ‘Done is better than perfect” was the motto of the mid-aughts. Adopters of this Internet maxim won their place atop the search and social heap. Such an approach to success seems antithetical to classical music’s long-held system of deference to experts. But Ukrainian pianist Valentina Lisitsa, 43, dared to tamper with that formula, using YouTube as her empty stage.

“I jokingly say that I’ve lived a few lives,” Lisitsa says, referring to her conservatory training and career on the piano competition circuit, which fizzled shortly after it began. “By 2007, I was just another blond Russian ex-pianist. I didn’t have an audience or concerts. I was at home with my son, wondering what to do with my life, so I put a clip on YouTube.”

The three-minute video of Rachmaninoff’s Etude Op. 39 No. 6, or “Little Red Riding Hood,” went viral, despite the piece’s relative obscurity. Following its success, Lisitsa posted videos of herself playing Liszt and Tchaikovsky. Her first-past-the-post strategy of flooding YouTube with videos of the repertoire paid off, yielding more than 60 million views and 100,000 YouTube subscribers. Fame ultimately translated into album deals — “Valentina Lisitsa Plays Liszt” is her newest — and a global touring schedule that was scheduled to bring her to the Library of Congress last Thursday, a visit that was canceled because of the government shutdown.

Lisitsa decided to try YouTube after realizing that she could not compete in a classical music business with so many talented pianists who studied in conservatory.

“The level of every pianist coming out of conservatory has never been higher,” she said. “So many pianists are coming out of wonderful music schools, but they don’t know where to look for audience.”

Although Lisitsa had a classical career in the 1990s, she describes it as short-lived. She entered Kiev Conservatory at 17 and met her husband, Alexei Kuznetsoff, there. They competed and toured together, ultimately settling in North Carolina. She recalls that the only work she could get was substituting for touring pianists if they became sick or canceled.

“The danger is that we musicians are a commodity,” Lisitsa said. “There was a transition of me as musician to me as entrepreneur, which they don’t teach you in music school.”

Lisitsa has, in many ways, become the symbol of a new business model for the classical industry, which eschewed the rules of the Internet until recently. Unlike many established musicians who feared that Internet piracy and free downloads would destroy recording careers, Lisitsa is the counter example: She embraced the free-culture philosophy, flooding the Internet with videos and media, which led to her discovery. She says she had no choice but to embrace this strategy when she realized her homemade DVD of Chopin’s 24 Etudes was being uploaded illegally on YouTube.

“At first I was removing the clips one by one, but then I thought, ‘What am I doing? I’m angering my fans,’ ” she said. “I uploaded it to YouTube and a strange thing happened: It hit Number One on Amazon.”

Lisitsa is sometimes surprised that her videos resonated so much with audiences. She’s an impeccable pianist who has been heralded by critics, but even the most famous musicians haven’t developed her large digital fan base. Pianist Lang Lang has fewer than 10,000 subscribers listed on his YouTube channel. Yo-Yo Ma has fewer than 2 million views. Itzhak Perlman? Fewer than 1 million view on his official channel, even though he joined YouTube a year before Lisitsa. Her dominance on the site is unparalleled.

“I think maybe people are very attached to the simple style,” she says. “I’m not dressing up for the videos. I’m not about fashion and don’t care about impressing people with elaborate productions.”

Still, she notes, there are drawbacks to digital fame, with many wondering whether her following will fizzle. She says the industry is still skeptical of what it views as self-promotion. She’s hoping the story of her success changes that mind-set within classical music.

“We musicians want a bigger audience, we want more people to come and listen,” Lisitsa says. “We sometimes act as though you need a great education to understand [classical music]. But I look at who is listening to my videos on YouTube, and it’s people from developing countries, not associated with classical or big concert halls. I see the growth and want to connect with these fans.”