Media
Why Do We Use Italian Words to Describe Music?
August 17th, 2018
Tags: miscellaneous 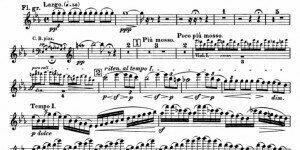 In 2007, the ever fashion-forward musician Kanye West boasted “I don’t see why I need a stylist / when I shop so much I can speak Italian.” Mr. West, it appears, has acquired so much Gucci, Fendi, Versace, Prada et al. over the course of his career that he’s confident that during a trip to Italy he’ll be able to communicate just fine with the vocabulary he picked up during those luxury shopping experiences. Nearsighted? Probably, but I’m sure he’s not the first musically oriented person to have this thought.

Even if you don’t know how to read music, there’s no doubt you’ve encountered loads of Italian during your musical experiences. Music is often said to be a universal language, but Italian just might be the language of music itself. It’s everywhere, peeking between the lines and spaces (“these notes are played staccato!”), declaring the sections of multi-movement works (The adagio dragged a bit, but man was that scherzo slammin’). At the opera, we might even find ourselves shouting some Italian after a particularly beautiful aria, showering the singers with bravos, bravas or whatever grammatically gendered configuration may be called for. Full story.