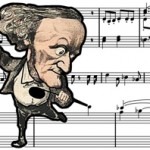 When physicist John Smith spent the night in his garden with the score to Götterdämmerung, the final opera in Richard Wagner’s four-part, 15-hour epic, Der Ring des Nibelungen, he wasn’t interested in its account of the apocalyptic struggle of Norse gods for control of the world. Smith was concerned with a struggle of a different sort—one between the opera’s words and music that might elucidate the controversial German composer’s peculiar vision for the future of art.

On Smith’s mind was an age-old difficulty all soprano singers face: They mispronounce lyrics when singing powerfully in the top half of their range. This “soprano problem” was formally recognized at least as far back as 1843, when French composer Hector Berlioz wrote in his Treatise on Instrumentation that “[sopranos] should not be required to sing many words on high phrases, since this makes the pronunciation of syllables very difficult if not impossible.” It does not appear, however, that Berlioz—or anyone else—ever understood why this problem occurred.

In 2004, Smith and his colleagues Joe Wolfe and Elodie Joliveau at the University of New South Wales published a study in the Journal of the Acoustical Society of America that revealed the physiological cause of the soprano problem for the first time. They sent an acoustic signal through the vocal tracts of nine sopranos and used a microphone to measure how the signal changed when the sopranos sang vowel sounds at various pitches. They found that when a soprano sings at high pitches, she adjusts her vocal tract to make her voice resonate. In effect, she “tunes” the resonance frequency of her vocal tract to match the frequency of the pitch at which she is singing. This vocal-tract tuning, which gives a soprano’s voice enough power to fill an opera house, is what makes certain words at high pitches difficult for the audience to understand. (It is joked by singers that Wagner’s character of Siegfried in Der Ring des Nibelungen ought to have been called Sahgfried, as his name is sometimes pronounced that way by sopranos looking to get the most volume out of their voices.) Jane Eaglen, a critically acclaimed soprano who has performed Wagner’s works in opera houses worldwide, explains that sopranos must try to find a balance between power and clarity. “It’s really about how you modify the vowels at the top of the voice so that the words are still understandable but so that you are also making the best sound that you can make,” she says.

Composers generally cope with this problem by writing lyrics for sopranos that are not essential to their operas’ plots. But Smith and Wolfe began to wonder whether some hadn’t found a better solution. They realized that composers could actually avoid the problem completely by pairing words with notes at which the vowel sounds resonated naturally in a singer’s mouth. Smith saw Wagner—a perfectionist notorious for writing long and demanding soprano roles—as an obvious candidate on which he and Wolfe could test their theory.

Wagner was a ruthless opportunist and an outspoken anti-Semite with an ego on par with the grandiosity of his operas. His narcissism and stubbornness plagued his personal life, but shaped him into an idealistic and dedicated artist who was utterly uncompromising in his work. It took him almost 30 years to complete his Der Ring des Nibelungen cycle. He was methodical in his research, engrossing himself in Hellenic dramas and Norse mythology. He worked and reworked each opera without regard for the growing horde of creditors that was never far behind him. When need be, he even created new instruments and edifices—he invented the Wagner tuba, and, in the 1870s, built his own opera house, the Bayreuth Festspielhaus, just to get the sounds he wanted.

Smith felt that through this obsession with perfection, Wagner might have come to understand the relationship between vowel sounds and pitch necessary to overcome the soprano problem. “He was a man of huge experience who had a lot of time to polish his operas,” Smith explains. “Others had to do it for a living, but Wagner sponged off other people.”

Perhaps most importantly, Smith’s decision to focus on Wagner was also influenced by the sheer scope and demand of Wagner’s ultimate vision: to synthesize all forms of artistic expression into what he called “total artwork.” He wrote passionately about this theory in his 150-page essay, The Art-Work of the Future, referring to dance, tone, and poetry as the “three primeval sisters” without which no work of art is complete.

“Wagner always said that he wanted to be Shakespeare and Beethoven in one. He wanted to write great plays and set those plays to great music,” says Michael Saffle, a musicologist at Virginia Tech. In pursuit of “total artwork,” Wagner allowed no artistic component of his operas to take precedence over any other; the plot was as important as the score and the design of the set as important as the poetry of the libretto. (He considered his librettos literature in their own right, even going so far as to publish them as independent works.) His operas contained subtle plot twists that required his audience to pay careful attention to the lyrics being sung. Wagner couldn’t—and wouldn’t—compromise the intelligibility of his lyrics during high soprano parts. “You weren’t supposed to go just to tap your toe to the tunes,” Saffle says. “He didn’t want that. He wanted you to take in everything, and everything had to play a crucial part.”

So one evening in his garden while he was recovering from surgery, Smith took up a pen and paper and went through Götterdämmerung note-by-note, lyric-by-lyric, recording which notes were paired with which vowel sounds. In the early hours of the next morning he wrote a computer program to determine with statistical certainty whether Wagner had in fact used a vowel-pitch matching technique. Looking at the program’s first results, he was amazed. There was a clear relationship.

After Smith’s discovery, he and Wolfe began analyzing more of Wagner’s work. “It’s quite a tedious job, but sitting in the garden reading Wagner is not a bad way to spend your time,” Smith says. In all, Smith and Wolfe looked at four of the composer’s works, including Tristan und Isolde and three operas from Wagner’s magnum opus, Der Ring des Nibelungen. In each case they found a statistically significant correlation between the music and lyrics. For comparison they also looked at operas by Mozart, Rossini, and Strauss and determined that, in these compositions, no such correlation existed. This didn’t surprise Eaglen. “Some composers had a better idea of how voices worked than others. For example, Beethoven did not really understand how the voice works. But Wagner clearly did,” she says. Smith and Wolfe first published their findings in the Journal of the Acoustical Society of America this July, and since then they have continued to test the works of more modern composers. “Wagner’s operas have certainly the strongest effect we have seen by a long way,” Smith says.

The researchers found that as Wagner’s career progressed he continued to improve his vowel-pitch matching technique, suggesting that over time he had developed an intuitive sense of the interplay between words and music in his operas. Though he couldn’t express this concept in scientific terms, on some level he certainly grasped it. Eaglen’s experience performing the character of Brünnhilde throughout the Der Ring des Nibelungen cycle also corroborates what Smith and Wolfe discovered. “The progression of that character is just fascinating. What Wagner writes for her at the end of Götterdämmerung isn’t the same music that he could have written in Die Walküre [the second opera in the cycle, written 18 years before Götterdämmerung]. His music develops along with her character,” she says.

The impact of Wagner’s “total artwork” is hard to pin down exactly, but the man himself is without question one of the most influential artists of the last 200 years. “Wagner influenced—positively or negatively—almost every subsequent musician,” Saffle says.  Some say composers like Richard Strauss and John Williams (the latter of whom is perhaps most well known for scoring films like Star Wars and Jurassic Park) both bear the mark of Wagner. And according to Saffle, you can find him outside of music as well. He is often considered to have anticipated film with his operas. “Terry Gilliam’s Fear and Loathing in Las Vegas is a Wagnerian movie,” he says. “It’s all-encompassing, like Wagner’s total artwork. It takes the individual and hurls him up into the air or throws him down into the ground. That sense of emotional space, that is Wagner.”

Just as Jackson Pollock incorporated fractals into his splatter paintings, Wagner seems to have used vowel-pitch matching in his operas—a concept that scientists wouldn’t formally explain for well over a century. And though it would certainly be going too far to suggest that vowel-pitch matching alone was responsible for Wagner’s grand compositions, without a strong intuitive sense of the human voice and its limitations, it is unlikely that he would have been able to take his unified theory of art so far. If understanding of concepts like vowel-pitch matching can emerge from the vastly different frameworks of art and science, then surely there is merit to considering Wagner’s thoughts on the eventual intersection of the two fields: In The Art-Work of the Future, he writes, “The end of Science is the justifying of the Unconscious, the giving of self-consciousness to Life…. As Science melts away into the recognition of the ultimate and self-determinate reality, of actual Life itself: so does this avowal win its frankest, most direct expression in Art.”